Back in 2012, PolitiFact Florida created a hilariously unbalanced fact check of the claim that shark attacks are more common than cases of voter fraud in Florida.

The key to the fact check was PolitiFact Florida's decision to only consider a "case" of voter fraud that was literally a legal "case" deemed worthy of prosecution by the Florida Department of Law Enforcement. No, we're not kidding. That's actually what PolitiFact Florida did (and we highlighted the hilarity once already).

It recently came to our attention that researchers have looked into the question of whether illegal immigrants vote (illegally) in U.S. elections.

The Washington Post published a column by the researchers on Oct. 24. They said, in part:

We decided to develop a conservative version of this estimate and apply it to Florida.

PolitiFact counted 72 shark attacks all-time from 2008 through 2011 (correction Nov. 1, 2014) in Florida and called it "Mostly True" that the number of shark attacks outnumbers the cases of voter fraud.

If PolitiFact Florida is correct that the number of shark attacks outnumbers cases of voter fraud, we have a recommendation.

Stay out of the water.
Posted by Bryan White at 2:23 AM No comments:

Email ThisBlogThis!Share to TwitterShare to FacebookShare to Pinterest
Labels: 2012, Angie Drobnic Holan, It's only fraud if you get caught, Katie Sanders, PolitiFact Florida

Conservative radio show host Larry Elder has an Oct. 30 criticism of PunditFact posted at Townhall.com. It's definitely worth a read, and here's one of our favorite bits:


Since PunditFact kicks me for not using purchasing power parity, surely PunditFact's parent, Tampa Times, follows its own advice when writing about the size of a country's economy? Wrong.

Elder does a nice job of highlighting PolitiFact's consistency problem. PolitiFact often abandons normal standards of interpretation in its fact check work. Such fact checks amount to pedantry rather than journalistic research.

A liberal may trot out a misleading statistic and it will get a "Half True" or higher. A figure like Sarah Palin uses CIA Factbook ratings of military spending and receives a "Mostly False" rating.

Of course Elder makes the point in a fresh way by looking at the way PolitiFact's parent paper, the Tampa Bay Times, handles its own reporting. And the same principle applies to fact checks coming from PolitiFact. The fact checkers don't follow the standard for accuracy they apply to others.
Posted by Bryan White at 1:03 PM No comments: 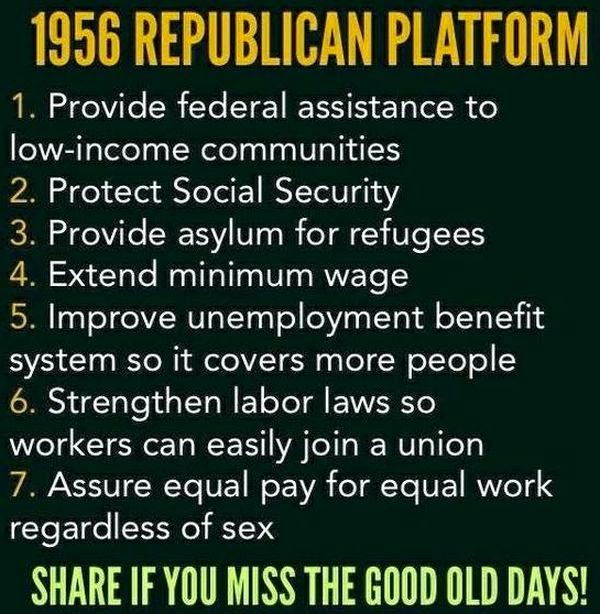 The question at the end, "Share if you miss the good old days!" implies a contrast between today's Republican Party platform and the platform in 1956. For us, the relevant point is No. 7, "Assure equal pay for equal work regardless of sex." Democrats have made the supposed Republican "war on women" a main point of their campaigns, partly by criticizing Republican opposition of the Democrats' proposed "Paycheck Fairness Act," which places new burdens on businesses defending against pay discrimination lawsuits. Equal pay for equal work, of course, already stands as the law of the land.

PolitiFact, on its main page of fact checks, elevates the fake contrast on the equal pay issue to first place:

It's horrible and biased reporting that has no place in a fact check.

Are things better in the text of the story? Not so much (emphasis in the original):


The 2012 platform doesn’t mention two of the meme’s seven items from 1956 -- unemployment benefits and equal pay for women.

The bottom line, then, is that on most of these issues, the GOP moved to the right between 1956 and 2012, though the degree of that shift has varied somewhat issue by issue.

PolitiFact finds no evidence of a shift on equal pay other than the issue's absence in the 2014 GOP platform. But that only makes sense given that federal equal pay laws went on the books in the 1960s. So there's no real evidence of any shift other than a fallacious appeal to silence, yet we have "equal pay" as PolitiFact's lead example of the GOP's supposed move to the right.

That’s generally correct. However, it’s worth noting that other elements of the 1956 platform were considered conservative for that era. Also, some of the issues have changed considerably between 1956 and 2012, such as the shift from focusing on post-war refugees to focusing on illegal immigration.

There's really no need to mention anything in the fact check about federal equal pay legislation passing in the 1960s, right?

This type of journalism is exactly what one would predict if liberal bias affected the work of left-leaning journalists. This fact check serves as an embarrassment to the practice of journalism.
Posted by Bryan White at 8:17 PM No comments:

Fact-checker can't tell the difference between "trusted" and "trustworthy"? 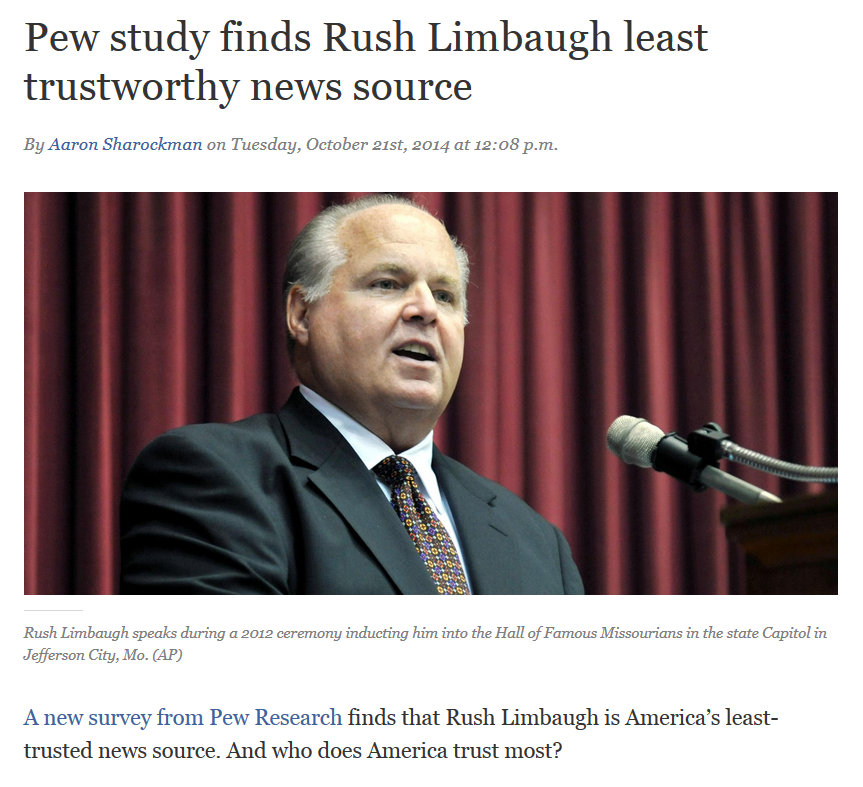 As if botching the headline isn't bad enough, the article contains more of PolitiFact's deceptive framing:


PunditFact is tracking the accuracy of claims made on the five major networks using our network scorecards. By that measure, 61 percent of the claims fact-checked on Fox News have been rated Mostly False, False or Pants on Fire, the most among any of the major networks.

As PolitiFact's methodology for constructing its scorecards lacks any scientific basis, this information is a curiosity at best. But by juxtaposing it with the polling data from Pew Research, the reader gets a gentle nudge in the direction of "Ah, yes, so the accuracy of PolitiFact's scorecards is supported by this polling!" That's bunk.

The scientific angle would come from an investigation into whether prior impressions of trustworthiness influence the ratings organizations like PolitiFact give to their subjects.

If PunditFact's article passes as responsible journalism then journalism is a total waste of time.

Posted by Bryan White at 2:15 PM No comments:

Hot Air: 'It’s time to ask PolitiFact: What is the meaning of “is”?'

Dustin Siggins, writing for the Hot Air blog, gives us a PolitiFact twofer, swatting down two fact-check monstrosities from the left-leaning fact checker.


In 1998, then-President Bill Clinton told the American people that he hadn’t lied to a grand jury about his relationship with Monica Lewinsky because, on the day he said “there’s nothing going on between us,” nothing was going on.

While that line has been a joke among the American people ever since, it looks like PolitiFact took the lesson to heart in two recent fact-checks that include some Olympic-level rhetorical gymnastics.

Siggins goes on from there, dealing with recent fact checks of senators Ted Cruz (R-Texas) and Jeanne Shaheen (D-N.H.).

Also consider reviewing our highlights of a few other stories by Siggins.
Posted by Bryan White at 5:52 PM No comments: