With less time to devote to this website, we don't often highlight outside work. But that was actually our aim when we started out!

Late last Friday, PolitiFact issued a “fact check” claiming that Florida governor Ron DeSantis’s recent swipe against the Civics Secures Democracy Act (CSDA) was “false.” Actually, DeSantis’s criticism of CSDA is on the mark. It’s PolitiFact’s reporting that’s fallacious. PolitiFact’s failed attack on DeSantis can fairly be called an opinion piece in disguise. But it’s also something more — and worse — than that. Yacob Reyes of PolitiFact thoroughly misrepresents DeSantis, merely refuting a straw man of his own making. Let’s have a look, then, at the media’s latest bogus hit job on DeSantis.

Key to PolitiFact's argument was its contention that the Civics Secures Democracy Act has language supposedly barring it from being used to set education policy. PolitiFact noted arguments to the contrary but framed them as unsupported conservative opinion.

Framing something as unsupported conservative opinion apparently means not needing to undercut the argument without a fallacious appeal.

The article [by Kurtz, in National Review] then suggested the criteria for receiving the grants could entice states to conform their curricula to "federal demands," such as when states began adopting Common Core, a set of national educational standards.
Common Core’s critics have often accused the federal government of coercing states into adopting the standards in exchange for grant money. We have fact-checked similar claims about Common Core before and found them inaccurate.

PoliitiFact inaccurately claimed it fact checked similar claims. The claims it checked were only superficially similar.

For our part, we pointed out to the PolitiFact author, Yacob Reyes, that liberal Vox.com made a argument parallel to the one PolitiFact dismissed as unsupported conservative opinion.

The federal government didn't write the standards, but it has promoted them. The stimulus bill included $4.4 billion in Education Department grants for states that adopted "college- and career-ready standards."

States weren't explicitly required to adopt the Common Core in order to compete for the federal money; they could have used their own standards if they proved to the Education Department that those standards prepared students for college. Nearly all of them adopted Common Core instead, and all of the states who eventually won the grants were Common Core states.

Too bad for Vox that correlations are only "True" when PolitiFact says they are.

It's just another case of PolitiFact substituting its own straw men for claims while presenting evidence weighted toward one side.

Kurtz's article is worth reading through to the last word.

PolitiFact: How can we rig this abortion fact check to help President Biden? Part III

We thought we were done with the series examining PolitiFact's efforts to help President Joe Biden on an abortion claim. Then we saw the video version of PolitiFact's fact check.

PolitiFact released the video after the "clarification" it performed after a Zebra Fact Check (Bryan's fact-checking website) correction request.

"With this decision, the conservative majority of the Supreme Court shows how extreme it is, how far removed they are from the majority of this country. They made the United States an outlier among developed nations in the world."

Anatomy of an Equivocal Argument

As with the original version of the fact check, the video version constructs an equivocal argument. Equivocal arguments make use of fallacies of equivocation, where terms change meaning in a way that alters the terms between a premise and the conclusion.

Biden claimed the Court made the United States an outlier among "developed nations," and that claim serves as a premise of PolitiFact's argument supporting the truth of Biden's claim. PolitiFact promptly changes that term to "economic peers" in the version of Biden's claim it chose to fact check:

We asked: 'Is the U.S. now an outlier among its economic peers?'

Why "economic peers" instead of Biden's phrasing, "developed nations"? Maybe because the change makes it easier to help Biden out?

By shifting the focus from Biden's phrasing to its own summary of Biden's words, PolitiFact informs its audience that the G7 (six nations in addition to the United States) counts as the relevant economic peer group. 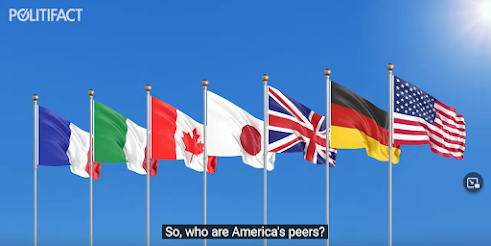 So, who are American's peers? The G7 is a group of the world's largest developed economies. It includes the U.S., Canada, the United Kingdom, France, Germany, Italy and Japan.

PolitiFact incrementally weans us off of the "developed nations" Biden mentioned and guides us to a handful of "the world's largest developed economies." And does it in the name of fact-checking.

A conscientious fact checker, minus clear guidance from the source of the claim it is testing, would use the same means of identifying "developed nations" each time it fact checks a claim involving the phrase.

How PolitiFact Has Used the Term 'Developed Nations'

In this case PolitiFact does not use the same means of identifying "developed nations" that it used in other fact checks.

The curve usually includes 23 countries, most of which are Western, and shows the United States lags behind other developed countries like Italy, Japan, Switzerland and New Zealand. Countries considered even less mobile than America include China, Brazil, Argentina and Chile.

Did no fewer than 29 OECD countries go from developed to something less than developed in one year? Count us skeptical.

After absurdly narrowing down "developed nations" to the G7, PolitiFact supposedly reviews the policies for each. Given that Zebra Fact Check pointed out the Northern Ireland discrepancy to PolitiFact, we'll focus on PolitiFact's description of United Kingdom abortion policy:

Abortion in the United Kingdom is legal up to 24 weeks with the approval of two doctors.This can be later if serious health risks emerge.

We pointed out to PolitiFact that policy in Northern Ireland differs from the rest of the UK and they still screwed it up. PolitiFact describes the policy for the bulk of the UK (Great Britain) as though it covers the entirety of the UK. It doesn't. In Northern Ireland abortion is legal up to 12 weeks, but it can be later owing to serious permanent health risk to the mother (or fetal abnormality, high risk of death).

PolitiFact should have known better than to include that falsehood in its video production.

PolitiFact's fact check makes us wonder if PolitiFact knows the meaning of "outlier."

1. One that lives or is located outside or at the edge of a given area: outliers of the forest standing in the field.
2. One that exists outside or at an extreme of a category, pattern, or expectation; an extreme case or exception: "those egg-laying outliers of mammaldom, the duck-billed platypus and the anteating echidna" (Natalie Angier).
3. A value far from most others in a set of data: "Outliers make statistical analyses difficult" (Harvey Motulsky).
4. A portion of stratified rock separated from a main formation by erosion.

We think Biden had to have definition No. 2 in mind when he called the United States an "outlier." Did PolitiFact equivocate on the definition of "outlier" and simply forget to tell us? Back to the words of the video:

Other countries in Europe, such as the Netherlands, Spain and Sweden, largely follow the pattern.

How many outliers can you have before the group of outliers is not longer outlying? In the European Union, Malta and Poland have strict abortion limits nationally. Why is PolitiFact cherry-picking EU nations with permissive abortion laws as though that solidifies "outlier" status for the United States?

Again, that isn't fact-checking. It's another case of equivocation, a text-based shell game that may trick the audience into accepting a bad argument.

The text version of the fact check tried to avoid the problem of redefining "outlier" by focusing on legislative method instead of abortion policy proper.

The reader should completely disbelieve our accusation until we back it up (bold emphasis added):

Biden said the Supreme Court decision overturning Roe v. Wade "made the United States an outlier among developed nations in the world" on abortion rights.

The ruling eliminates the national right to an abortion, which puts the U.S. at odds with other developed nations, including the other six G-7 nations, most of which have laws or court rulings that provide for abortion access on a national basis, though with restrictions. The U.S. ruling does leave in place state laws that permit abortion.

PolitiFact's "most of which" line makes that approach a laugher, however. Two of the G7 (The UK and the USA) do not provide abortion via national laws or court rulings, therefore the United States counts as an "outlier"?

Again, how many outliers can you have before the outliers no longer count as outliers? One out of seven might reasonably count as an outlier. But two out of seven? The latter perhaps if the two outliers were at opposite ends of the spectrum.

As we pointed out in our earlier treatment of this fact check, making the United States an outlier because of its federalist system makes a hash of what Mr. Biden tried to argue.

But as so often happens at PolitiFact, fact-checking takes a back seat to nurturing liberal narratives.

What Should Have Been

It should not have been hard to come up with a reasonable list of "developed nations" and then list their abortion policies and compare them to the range available in the United States. And after that see if the dictionary definition of "outlier" applies.

A fact checker that somehow avoids that approach ought to have some explaining to do.

A fact checker that produces an equivocal and incoherent fact check, such as PolitiFact's, ought to have even more explaining to do.

Posted by Bryan White at 9:47 AM No comments: