A PolitiFact gloss on the Michael Brown "murder"

We've been tracking evidence of PolitiFact's look-the-other-way stance on Dem0crats' campaign rhetoric on race. PolitiFact sees no need to issue a "Truth-O-Meter" rating when Democrats call President Trump a racist, for example.

Instead of issuing a "Truth-O-Meter" rating for either Democratic Party candidate over their Michael Brown statements, PolitiFact published an absurd PolitiSplainer article.

A Fox News article hits most of the points that we would have emphasized:


The fact-checking website PolitiFact again came under fire for alleged political bias Wednesday after it posted a bizarre article that refused to rule on whether Michael Brown was in fact "murdered" by police officer Darren Wilson in Ferguson, Mo. in 2014, as Democratic presidential candidates Kamala Harris and Elizabeth Warren falsely claimed last week.


Jacobson quoted Jean Brown, a communications professor who focuses on "media representations of African Americans," as saying that the entire question of whether Warren and Harris spread a falsehood was nothing more than an "attempt to shift the debate from a discussion about the killing of black and brown people by police."

The Fox article quotes the Washington Examiner's Alex Griswold asking why the expert opinion from Brown was included in the fact check.

We suggest that the quotation represents the reasoning PolitiFact used in deciding not to issue "Truth-O-Meter" ratings for Harris or Warren.

PolitiFact, per the Joe Biden gaffe, seems interested in truth, not facts.
Posted by Bryan White at 11:27 PM No comments:

We always look forward to public Q&A sessions with PolitiFact staff, for it nearly always provides us with material.

Funke stuck with PolitiFact boilerplate material for the most part, even channeling Bill Adair with his answer about PolitiFact's response to critics who suggest PolitiFact is biased.

Funke's chief error, in our view, was his repetition of a false PolitiFact public talking point:


As far as corrections: We're human beings, so we do make mistakes from time to time. That's why we have a corrections process. You can read our full corrections policy, but the bottom line is that we fix the wrong information and note it. If we give a new rating to a fact-check, we archive the old version so people can see exactly what we changed. Everything that gets a correction or an update gets tagged - see all tagged items.

We've pointed out dozens and dozens of mistakes at PolitiFact, and though we've prompted PolitiFact to fix quite a few mistakes the majority of the time PolitiFact ignores the critique and doesn't bother to fix anything. We tried to get PolitiFact Georgia not to interpret "pistol" as a synonym for "handgun" because revolvers count as handguns but do not count as pistols. No go. The mistake remains enshrined in PolitiFact's "database" of facts. And Funke's recent mistake in using a number PolitiFact found wanting as the deficit figure handed off from Bush to Obama still hasn't been fixed. Nor do we expect PolitiFact to break tradition by fixing it.

PolitiFact fixes mistakes if and only if PolitiFact feels like fixing the mistakes.

So Funke is wrong about the bottom line at PolitiFact. The PolitiFact "database" has more than its share of bad information.

Finally, Funke repeats the falsehood that "Everything that gets a correction or an update gets tagged," complete with a link to the very incomplete list of corrected items. PolitiFact does not use tags on many of its articles, particularly those that do not feature a rating. Corrections on those articles do not get tagged and do not appear on the list of corrections. Moreover, PolitiFact simply neglects to tag corrected fact checks on occasion.

Apparently it's too much to ask that PolitiFact staffers know what they're talking about when they describe PolitiFact's corrections process.
Posted by Bryan White at 4:30 AM No comments:

PolitiFact: The true half of Cokie Roberts' half truth is President Trump's half truth

PolitiFact's Aug. 3, 2019 fact check of President Trump finds he correctly said the homicide rate in Baltimore is higher than in some countries with a significant recent history of violence. But it wasn't fair of Trump to compare a city to a country for a variety of reasons, experts said.

So "Half True," PolitiFact said.

Here at PolitiFact Bias we apparently remember what PolitiFact has done in the past better than PolitiFact remembers it. We remembered PolitiFact giving (liberal) pundit Cokie Roberts a "Half True" for butchering a comparison of the chance of being murdered in New York City compared to Honduras.

Roberts was way off on her numbers (to the point of being flatly false about them, we would say), but because she was right that the chance of getting murdered is greater in Honduras than in New York City, PolitiFact gave Roberts a "Half True" rating.

We think if Roberts' numbers are wrong (false) and her comparison is "Half True" because it isn't fair to compare a city to a country then Roberts seems to deserve a "Mostly False" rating.

That follows if PolitiFact judges Roberts by the same standard it applies to Mr. Trump.

But who are we kidding?

PolitiFact often fails to apply its standards consistently. Republicans and conservatives tend to receive the unfair harm from that inconsistency. Mr. Trump, thanks in part to his earned reputation for hyperbole and inaccuracy, tends to receive perhaps more unfair harm than anybody else.

It is understandable that fact checkers allow confirmation bias to influence their ratings of Mr. Trump.

We think fact checkers should do better.
Posted by Bryan White at 4:30 AM No comments:


We wrote about PolitiFact's awful fact check of a tweet that used deficit numbers at the start and end of presidential terms in office to show it's wrong to think that Democrats cause deficits.

PolitiFact's FaceBook page took the misleading nature of that fact check and amplified it to the max with a false headline: 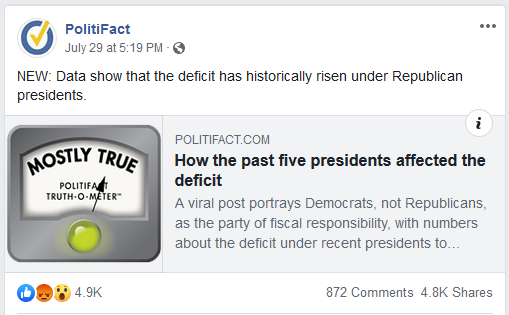 Contrary to the headline, the fact check does not tell how the past five presidents affected the deficit. Instead, the fact check pretends to address the accuracy of a tweet that suggests deficit numbers at the start and end of presidential administrations tell us which party causes deficits. That use of deficit numbers serves as an exceptionally poor metric, a fact PolitiFact barely hints at in giving the tweet a "Mostly True" rating.

The tweet falsely suggests those deficit numbers give us a reliable picture of party fiscal responsibility (and the way presidents affect the deficit), and PolitiFact amplifies those misleading messages.

It's almost like they think that's their job.
Posted by Bryan White at 7:46 AM 2 comments: