Great Moments in PolitiFact History I

PolitiFact emphasized that the last time a president was impeached was 20 years ago. The featured image? President Nixon.


It’s been two decades since the last impeachment. Here's a guide to how it works.https://t.co/qUvaOfvqjg pic.twitter.com/QyIQzRQlro
— PolitiFact (@PolitiFact) April 27, 2019

Was Nixon president 20 years ago?

Nice work, PolitiFact. That ought to help inflate the number of people who mistakenly believe that Nixon was impeached. And it keeps a Clinton from having their picture appear next to deck material announcing that it was 20 years since a president was last impeached.

Posted by Bryan White at 6:00 AM No comments:

When PolitiFact plucks a truth from a bed of untruth (or vice-versa) we call it "Tweezers" and tag the example with the "tweezers or tongs" tag.

But every once in a while PolitiFact goes beyond tweezing to pretend that the tweezed item and the bed of untruth were both true.

It's true, as Sanders said, that people in jail in Vermont may vote. Except perhaps those in jail convicted of voter fraud or other crimes that may run afoul of Vermont's constitutional stipulation that voters must maintain "quiet and peaceable behavior."

The problem occurs in the middle of Sanders' claim. Vermont's original 1793 Constitution (like its 1777 Constitution) limits voting to men above a certain age. So it's just not true that it says "everybody can vote."

PolitiFact might have solved the problem in the fact check header by shortening the quotation with an ellipsis. Like this: "In my own state of Vermont ... people in jail can vote." That statement pretty much counts as true if we assume that everyone in jail is of quiet and peaceable behavior by Vermont's definition.

Unfortunately, the text of PolitiFact Vermont's fact check reinforces the false middle of Sanders' claim instead of either explicitly excluding it or providing accurate context. The fact check does not mention that Vermont's early constitution did not allow women to vote. Nor does it let on that men had to attain a certain age to vote.

Given those omissions, we count it a major victory that PolitiFact noted the stipulation that voters must be of "quiet and peaceable behavior"--not that the potential exceptions affected PolitiFact's rating of Sanders' claim:

Sanders said: "In my own state of Vermont, from the very first days of our state’s history, what our Constitution says is that everybody can vote. That is true. So people in jail can vote."

It’s true that Vermont felons can vote from prison today, and we can’t find anything to suggest that hasn’t always been the case in the state. Though it seems quite possible that the efforts being made today to allow them to cast ballots hasn’t always been made.

The Vermont Constitution requires people to be of "quiet and peaceable behavior," but otherwise places no restrictions on who can vote. And Sanders said prisoners "can" vote, not that they always have voted.

We rate this claim True.

Every person of the full age of eighteen years who is a citizen of the United States, having resided in this State for the period established by the General Assembly and who is of a quiet and peaceable behavior, and will take the following oath or affirmation, shall be entitled to all the privileges of a voter of this state:

You solemnly swear (or affirm) that whenever you give your vote or suffrage, touching any matter that concerns the State of Vermont, you will do it so as in your conscience you shall judge will most conduce to the best good of the same, as established by the Constitution, without fear or favor of any person.

Every person who will attain the full age of eighteen years by the date of the general election who is a citizen of the United States, having resided in this State for the period established by the General Assembly and who is of a quiet and peaceable behavior, and will take the oath or affirmation set forth in this section, shall be entitled to vote in the primary election.

Is this why we have fact checkers or what?

Posted by Bryan White at 4:30 AM No comments:

But there's an upside.

Pulitzer Prize-winning PolitiFact has failed to win a Pulitzer for 10 straight years, beating our streak by two years.

We track these numbers, by the way, because PolitiFact tries to use its Pulitzer Prize from 2009 as a type of mark of excellence endorsing the quality of its fact-checking.

We call that a crock. We've documented that Pulitzer juries do not fact check entries submitted for Pulitzer Prize consideration. And PolitiFact's set of entries in 2009 included its preposterous ruling that it was "Mostly True" Barack Obama's uncle helped liberate Auschwitz.

We created this video a few years ago to commemorate PolitiFact's long-running failure to repeat its Pulitzer Prize success from 2009.

We still think it's funny. It's funnier every year, in fact.

PolitiFact: 'Tweets' is to blame!


As if we needed a new reason to condemn the utility of PolitiFact's "report card" featurettes.

PolitiFact, once a candidate has accumulated 10 or more "Truth-O-Meter" ratings, features a page showing a graphic display of the distribution of those ratings. Here's a typical one:

Today we ran across a fresh reason for regarding the report cards as unrepresentative. A PolitiFact fact check found that a charge against President Trump, that he was calling illegal immigrants "animals," was "False." PolitiFact's fact check notes that Democratic presidential candidates Kirsten Gillibrand and Pete Buttigieg retweeted the falsehood along with comments condemning Trump's supposed choice of words. Trump, it turned out, was referring to gang members and not ordinary illegal immigrants.

By blaming the falsehood on "Tweets," PolitiFact need not sully the report cards of Gillibrand and Buttigieg.

Good, virtuous Gillibrand. Just look at that report card! No "False" and no "Pants on Fire." 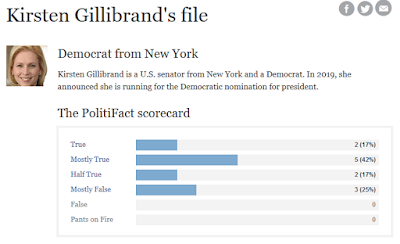 The likewise good and virtuous Buttigieg does not yet have enough Truth-O-Meter ratings to qualify for a report card. He has just one "True" rating and one "Half True" rating. And you can rest assured that when Buttigieg does have a report card graphic that his retweet of a falsehood about Trump will not appear on his record. "Tweets" gets the blame instead.

With just a glance at "Tweets'" report card, one can tell "Tweets" is less virtuous than either Gillibrand or Buttigieg. 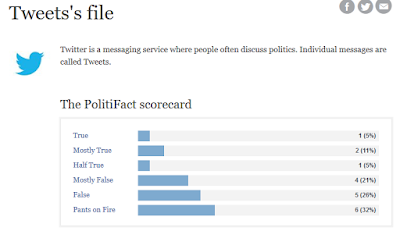 Except we're kidding because comparing the report cards is a worthless exercise.

We've repeatedly called on PolitiFact to add disclaimers to its "report cards" informing readers that the report cards serve as no useful guide in deciding which candidate to support.

We believe PolitiFact resists that suggestion because it wants its worthless report cards to influence voters. Don't vote for naughty "Tweets." Vote for virtuous Kirsten Gillibrand. Or virtuous Pete Buttigieg. It's from PolitiFact. And it's science-ish.
Posted by Bryan White at 7:54 AM No comments:

As we mentioned in a Feb. 2, 2019 post, we love it when PolitiFact folks do interviews. It's a near guarantee of generating material worth posting. In celebration of "International Fact-Checking Day," PolitiFact Director Aaron Sharockman and PolitiFact Editor Angie Drobnic Holan conducted a Reddit "Ask Me Anything" event.

I asked PolitiFact to describe why it advocates transparency while keeping the identities and votes of its "Star Chamber" secret. PolitiFact's "Star Chamber" votes on each "Truth-O-Meter" rating. The majority vote rules, though PolitiFact claims it achieves unanimity for most votes. My question wasn't answered (no great surprise there).

Most of the interactions were boilerplate answers to boilerplate questions. But there were a few items of special interest.

Though Holan flatly said "Everything that gets a correction or an update gets tagged (see all tagged items)," we were ready with two recent cases contradicting her claim. And we let that cat out of the bag.

One participant asked a question suggesting PolitiFact does not rate statements consistently (suggesting contemporary ratings of Trump make past ratings look far too harsh). Sharockman implied PolitiFact has kept its system consistent over the years:


But beyond the sheer volume [of Trump ratings--ed.], the standards we use to use [sic] to issue our ratings really hasn't [sic] evolved in the 11 years we've been doing this. In that sense, a Pants on Fire in 2009 should still be a Pants on Fire claim today, and vice versa.

There are two big problems with Sharockman's claim. First, PolitiFact itself announced a change to its rating methodology back in 2012.

Second, PolitiFact has admitted that its ratings are pretty much subjective. Sharockman's chosen example, the dividing line between "False" and "Pants on Fire" is perhaps the most sensational example of that subjectivity. How does Sharockman not know that?


The Vast Right-Wing Conspiracy Against PolitiFact?

Someone (not me!) asked "Who fact checks you [PolitiFact--ed.]?"

Sharockman's answer paints PolitiFact as the focus of a concentrated group of hostile editors. With all those people combing PolitiFact material for hours on end, it's amazing that PolitiFact makes mistakes so rarely.

But is there any evidence at all supporting Sharockman's supposition that "a lot of people are reading everything we write looking for mistakes"? We at PolitiFact Bias announced long ago that we could not do a thorough job vetting PolitiFact's body of work:


As PolitiFact expands its state operations, the number of stories it produces far exceeds our capacity to review and correct even just the most egregious examples of journalistic error or bias.  We aim to encourage an army of Davids to counteract the mistakes and bias in PolitiFact's stories.

Who else could Sharockman have had in mind? Media Matters For America? The (defunct) Weekly Standard?

And look how many times it fails, without swallowing the fiction that this represents the entire number.

Holan and Sharockman are politicians advocating for PolitiFact. It appears we cannot trust PolitiFact to hold its own to account.
Posted by Bryan White at 9:44 AM No comments: