Ready for another example? Let's go!

Youngkin claimed he won cities no Republican had won before in Virginia. Obviously a fact checker needs to find a reasonable definition of "city" to fact check Youngkin's claim.

PolitiFact's method credits the state of Virginia with 38 cities. Does that seem low? There's justification for it, even if it's the wrong justification for this fact check. We charge PolitiFact with failing to give readers anything approaching an adequate explanation.

Virginia has an unusual feature regarding its cities. PolitiFact mentions it casually, without explanation, as it sets up its fact-finding:

In its summary section PolitiFact said "Youngkin won 14 of Virginia's 35 cities in that [2021--ed.] election." Did Virginia have 38 or 35 independent cities in 2021? We expect PolitiFact will fix that inconsistency as though it was a typographical error. But we'll focus on the key term "independent cities," which PolitiFact does not explain to its readers.

There are 41 independent cities in the United States. Virginia counts as home to 38 of them.

So, what is an independent city? It's a city independent of the county (or counties?) in which it is located:

Was Youngkin using Virginia's understanding of "city" when he addressed his New York audience? We judge there's little reason to think so. Yes, Youngkin himself, as governor of Virginia, must possess some awareness of Virginia's unusual technical standard for cities. But should Youngkin expect this audience to share that understanding? That seems like a stretch.

PolitiFact doesn't waste any words at all on that possibility. Why?

For the journalistic team at PolitiFact Virginia, Virginia's particular approach to defining cities may count as second nature. That may have blinded the team to alternate possibilities. Or, PolitiFact may have stuck with Virginia's narrow definition of "city" to simplify its fact-finding. It's easier to check the list of independent cities to test Youngkin's claim than to check the list of independent cities plus towns-that-may-reasonably-fit-the-usual-definition-of-cities.

But a fact checker that checks facts using methods of convenience over methods of accuracy does not count as much of a fact checker. Maybe Youngkin won no cities that hadn't been won before by a Republican. We do not plan to fact check that. We'll simply point out that PolitiFact Virginia's fact check uses an unacceptable approach to the problem.

PolitiFact should have explained Virginia's unusual approach to designating cities, at minimum, if it failed to properly fact check Youngkin's claim according to the typical definition of "city."

Oversights such as these are what we should expect of biased fact checkers. And that's what we see from PolitiFact on a regular basis.

Narrative-shepherding instead of fact-checking for America as stolen land

One has to hand it to PolitiFact's Yacob Reyes. Earlier this year, Reyes turned a mostly unoccupied barrier island into the whole of Lee County. Now, Reyes turns bad-faith treaties affecting a limited number of American lands into support for the narrative of the United States (plus other modern American nations north and south) consisting of stolen land.

It takes DeSantis out of context, and instead of devoting an "In Context" article to DeSantis' statement, akin to the cover PolitiFact provided for President Obama when he informed business owners "You didn't build that," DeSantis received a "Pants on Fire" rating.

Strikingly, PolitiFact apparently draws a complete blank in trying to figure out why DeSantis would say the United States is not build on stolen land. That comes through in two ways. First, PolitiFact opines in print that it "wondered what DeSantis was referring to and whether he was right in his assessment of whether the U.S. was built on 'stolen land.'" Second, PolitiFact offered absolutely nothing to represent DeSantis position other than tweets from DeSantis associate Christina Pushaw.

Pushaw tweeted an image promoted by Democratic Party candidate for Lieutenant Governor Karla Hernández-Mats saying "No one is illegal on stolen land." After reporting that Hernández-Mats offered no response to its questions about the image, PolitiFact drops that subject for the remainder of the article.

That's how PolitiFact treated the context.

With the context safely ignored, PolitiFact documents some of the admittedly raw deals the Native Americans got and declares DeSantis as wrong as can be:

It's well-documented that the U.S. repeatedly made treaties with Native Americans and then violated them using force and other means to accommodate non-Native settlement. Courts, including the U.S. Supreme Court, have time and again affirmed that as fact.

Government-endorsed actions to remove Native Americans from their ancestral lands included the 1830 passage of a federal law that led to war and resulted in thousands of Native deaths and more than 3,000 Seminoles being removed from Florida.

DeSantis' claim is wildly historically inaccurate. We rate it Pants on Fire!

How does that push back against a DeSantis objection to the immigration statement Hernández-Mats promoted? It doesn't. Instead, it blandly moves in step with liberal-progressive orthodoxy. PolitiFact can't be bothered to dig up articles that explain the objection to singling out Western nations as occupying stolen land.

The narrative of the ‘stolen country’ or ‘Native American genocide’ does not stand up to scrutiny by any honest and clear-sighted historian. It is a dangerously myopic and one-sided interpretation of history. It has only gained currency because most practising historians and history teachers are either susceptible to groupthink, or else have been cowed into silence by fear of losing their jobs. Reduced to its puerile form of ‘statement of guilt’, this myth puts 100 per cent of the burden on Europeans who are held responsible for all historical evil, while the First Nations people are mere victims; martyrs even, whose saintlike innocence presumes that their civilisation and society were practically perfect in every way.

All Land is Stolen/Anthony Galli:

The only reason you can claim to “own” land is because of the implicit threat of military/police force against anyone who might try to take it from you. In the good ol’ prehistoric days, man would have to defend his own cave, but now our self-defense is largely done by our respective governments so that we can worry about other things like what’s on Netflix. In other words, a country is one big cave where the current occupant claims to own the cave by threatening force if you try to “steal” it.

In fact, what makes the United States of America so special is how well we treated the former inhabitants of the land we purchased… relative to how every other nation on Earth had treated conquered people up-till that point, which granted still isn’t saying much because the Trail of Tears definitely wasn’t a walk in the park.

Authors such as these help point out that viewing one's own nation as a thief will tend to erode society. And given that every nation qualifies as a thief in trivial "stolen land" terms, there is no real solution to the problem that doesn't involve destroying society. Further, in terms of permitting free immigration on the southern border, why should the descendants of land-stealing conquistadors have title to land stolen in an arguably more civilized way north of the Mexican border?

It doesn't make sense. But PolitiFact will not present those views.

PolitiFact has a narrative to nurture. And excluding competing narratives serves as one means toward that end.

We continue to update our research project examining PolitiFact's bias in applying its "Pants on Fire" rating.

Through the end of October 2022, PolitiFact had only given a Democratic Party officeholder/candidate/organization/appointee one "Pants on Fire" rating that counts toward our statistics. Our count omits claims from that attack the claimant's own political party. One of those occurred, published through PolitiFact New York.

As a result, we found PolitiFact nearly six times more likely to subjectively rate (what it views as) false claims from Republicans as "Pants on Fire" compared to such claims from Democrats. 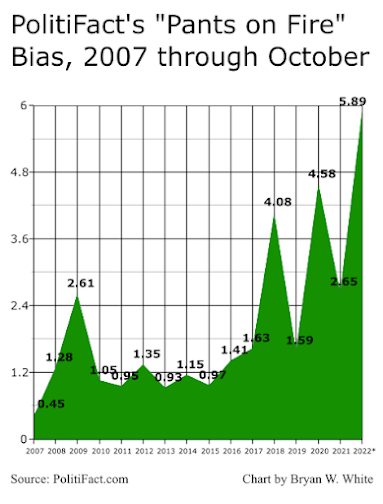 Interestingly, PolitiFact National published its first "Pants on Fire" rating for a Democrat in 2022 not long after we tagged PolitiFact's Editor-in-Chief Angie Drobnic Holan in our tweet about this graph. A graph including the November stats as of today would put the 2022 PoF Bias number near 3.2--not the all-time record but instead solidly among the four highest bias measures taken since 2007.

Of course new ratings may move the numbers greatly by the end of the year.

Readers curious about the trends and details of the chart may wish to look at our explanation for the full chart at the end of 2021.

Posted by Bryan White at 9:46 AM No comments: