Fact Check not at PolitiFact Illinois

One of the characteristics of PolitiFact that drags it below its competitors is its penchant for not bothering to fact check what it claims to fact check.

Our example this time comes from PolitiFact Illinois:

From the above, we judge that "Most climate scientists agree" that we have less than a decade to avert a worst case climate change scenario counts as the central claim in need of fact-checking. PolitiFact hints at the confusion it sows in its article by paraphrasing the issue as "Does science say time is running out to stop climate disaster?"

The fact is that time could be running out to stop climate disaster while at the same time (Democrat) Sean Casten's claim could count as entirely false. Casten made a claim about what a majority of scientist believe about a short window of opportunity to avoid a worst-case scenario. And speaking of avoidance, PolitiFact Illinois avoided the meat of Casten's claim in favor of fact-checking its watered-down summary of Casten's claim.

The Proof that Proves Nothing

The key evidence offered in support of Casten was a 2018 report by the United Nations Intergovernmental Panel on Climate Change.

The problem? The report offers no clear evidence showing a majority of climate scientists agree on anything at all, up to and including what Casten claims they believe. In fact, the report only mentions "scientist" or "scientists" once (in the Acknowledgments section):


A special thanks goes to the Chapter Scientists of this Report ...

A fact checker cannot accept that report as evidence of what a majority of scientists believe without strong justification. That justification does not occur in the so-called fact check. PolitiFact Illinois apparently checks the facts using the assumption that the IPCC report would not claim something if a majority of climate scientists did not believe it.

And More Proof of Nothing

Making this fact-checking farce even more sublime, PolitiFact Illinois correctly found the report does not establish any kind of hard deadline for bending the curve on carbon emissions (bold emphasis added):


Th(e) report said nations must take "unprecedented" actions to reduce emissions, which will need to be on a significantly different trajectory by 2030 in order to avoid more severe impacts from increased warming. However, it did not identify the hard deadline Casten and others have suggested. In part, that’s because serious effects from climate change have already begun.

So PolitiFact did not bother to find out whether a majority of scientists affirm the claim about "less than a decade" (burden of proof, anyone?) and moreover found the "less than a decade" claim was essentially false. We can toss PolitiFact's line about serious effects from climate change already occurring because Casten was talking about a "worst-case scenario."

Does that make sense?

Is it any wonder that Independents (nearly half) and Republicans (more than half) think fact checkers favor one side?

Also worth noting: Where does that "'worst-case scenario'" phrase come from? Does Casten put it inside quotation marks because he is quoting a source? Or is it a scare quote?

We confirmed, at least, that the phrase does not occur in the IPCC report that supposed served as Casten's source.

We will not try to explain PolitiFact Illinois' lack of curiosity on this point.

Let PolitiFact Illinois do that.


Update Sept. 4, 2019: We originally neglected to link to the flawed PolitiFact Illinois "fact check." This update remedies that problem.
Posted by Bryan White at 1:11 PM No comments:

It was wasn't even a year ago that PolitiFact pompously announced it isn't biased, but now PolitiFact founder Bill Adair has muddied the waters by announcing from his lofty perch at Duke University that bias is good.

Doubtless it is important to make take Adair's words in context.


Op-ed: Bias is good. It just needs a label.


In context so far: Adair appears to say bias is good if the reader understands it (hence the need for a label).

Adair repeated the same point in the article and then used a graphic to spell out what he's saying: 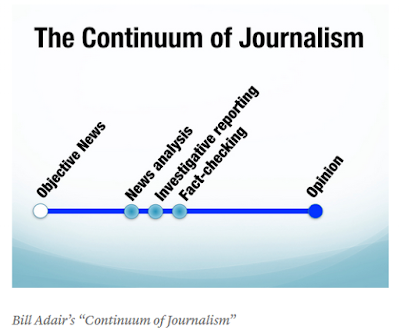 It's hard not to notice that Adair's graphic appears to concede what we have argued for years here at PolitiFact Bias. Fact-checking is not some kind of objective and scientific pursuit even if we set aside the subjective linear-scale truth ratings. Adair understands fact-checking contains more opinion than does "news analysis," with no other form of journalism closer to "opinion."

Unfortunately Adair does little to distinguish the desirable types of bias he's probably talking about--bias toward truth and democracy, for example--from unhealthy cognitive biases. But at least he gives clear guidance that journalists should appropriately label their work.

Now we just need to find the appropriate label at PolitiFact, right?


PolitiFact is not biased -- here’s why

Seriously, we're not aware of any prominent acknowledgement of bias labeling at PolitiFact.com.

If such a thing existed, perhaps we should expect to find it on PolitiFact's statement of principles. But we get this instead:

PolitiFact seeks to present the true facts, unaffected by agenda or biases. Our journalists set their own opinions aside as they work to uphold principles of independence and fairness.

Anybody see an expression of the idea "bias is good" in there? We don't.

PolitiFact over its history has encouraged readers to take its biased reporting as objective reporting.

It deceived and continues to deceive its readers by the standard Adair advocates.
Posted by Bryan White at 10:20 AM 1 comment: