The intermittent "counterirritant" returns with another critique of PolitiFact, this time skewering Poynter's Pedants for ignoring the context of Rush Limbaugh's comments regarding the Bain-Bane connection Limbaugh mentioned on his radio program.


The transcript PolitiFact used as a source offers more support for the radio host than it does the fact checkers. Only two sentences discuss whether the name Bane was selected because of Romney. The first is a question: “Do you think that it is accidental that the name of the really vicious fire breathing four eyed whatever it is villain in this movie is named Bane?” After asking that question, Limbaugh was interrupted and went off on a tangent. When he returned to the subject, he continued: “So, anyway, this evil villain in the new Batman movie is named Bane.  And there’s now a discussion out there as to whether or not this is purposeful and whether or not it will influence voters.” After noting it, Limbaugh never takes a side in the discussion of purposefulness.

The point is inarguable:  PolitiFact fact checked Limbaugh on a statement he never made, unless one insists without reasonable supporting evidence that his question was rhetorical.  PolitiFact didn't bother making the argument and moreover decided against dealing with this issue through its "In Context" feature.  "In Context" functions for PolitiFact pretty much like a "nothing to see here" tag.

The critique by counterirritant serves as a fine bookend for my "PolitiFlub" critique of the same PolitiFact item.  I took a different tack, showing that even if Limbaugh was making the claim PolitiFact imagined the fact checkers went about their business in entirely the wrong way.


Jeff adds: (07/24/12): Lest there be any confusion about what PolitiFact accused Rush of saying, here's a screenshot of their twitter feed: 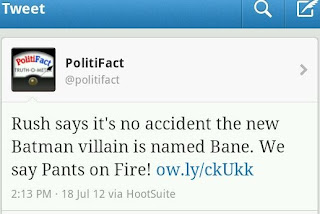