Words matter -- We pay close attention to the specific wording of a claim. Is it a precise statement? Does it contain mitigating words or phrases?
--Principles of PolitiFact and the "Truth-O-Meter"


It's a testament to PolitiFact's warped self-image that it continues churning out journalistic offal even while enduring a wave of substantive criticism.

Our latest example comes again from the Republican National Convention, where Callista Gingrich claimed that the Obama administration's foreign policy has led to decreased respect for the United States.

A legitimate fact checking enterprise immediately suspects that Gingrich referred to respect from foreign governments in terms of recognizing the U.S. as a power to which deferral yields the most beneficial results.  In other words, other nations fear the United States depending on the degree to which they operate contrary to our policy designs.  Based on that premise, the legitimate fact checker asks Gingrich to clarify the intent and tries to find a verifiable statistic that measures her accuracy.


While surveys are currently being undertaken in 20 nations, only 14 of those have been done for long enough to shed light on Callista Gingrich’s claim.

No doubt PolitiFact used the opinions of foreign policy experts to determine that the Pew data were an appropriate measure. 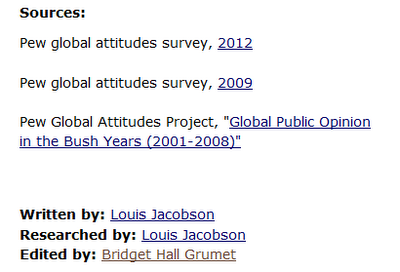 Seriously?  No expert sources?  Not one?

That's not a responsible fact check.  The global standing of the United States does not depend on the popular view among the world's peoples.  It comes directly from the way the world's leaders view the United States and whether they believe they can flaunt their power contrary to U.S. interests.

Why does anyone take PolitiFact seriously?

If there's any doubt that PolitiFact is peddling editorial pieces as objective reporting, check out this Bret Stephens op-ed in the Wall Street Journal last week discussing the same topic and using the same sources:


In June, the Pew Research Center released one of its periodic surveys of global opinion. It found that since 2009, favorable attitudes toward the U.S. had slipped nearly everywhere in the world except Russia and, go figure, Japan. George W. Bush was more popular in Egypt in the last year of his presidency than Mr. Obama is today.

It's true that these surveys need to be taken with a grain of salt: efficacy, not popularity, is the right measure by which to judge an administration's foreign policy. But that makes it more noteworthy that this administration should fail so conspicuously on its own terms. Mr. Obama has become the Ruben Studdard of the world stage: the American Idol who never quite made it in the real world.

Is PolitiFact accusing Mr. Stephens of lying? Inaccuracy? Or is the reality that the world's opinion of America is beyond the scope of objective, measurable standards? How could two reputable outfits come up with such contradictory interpretations of the same facts? What is the measuring stick that makes Louis Jacobson and the Truth-O-Meter the final arbiter of truth on one end and Bret Stephens a dishonest, partisan dolt on the other?

Callista Gingrich made a perfectly reasonable, if not politically rhetorical, statement about Obama's influence on the world's impression of our country. She offered an opinion that has solid, if not conclusive, support. PolitiFact's biggest lie is their claim that they can fit opinions onto a ratings scale and objectively disprove them with opinions of their own.

The reality is PolitiFact often publishes opinion pieces instead of fact checks. And if it expects to maintain whatever shred of credibility it has left, it should take a lesson from Mr. Stephens' employer, and publish its articles on the editorial page.


(Earlier today I explained even more problems with PolitiFact's treatment of Gingrich's claim in the comments section below, so I won't repeat them here.)