These are definitely the people we want doing our fact checks.

PolitiFact Georgia published a statistical breakdown of its fact checks for 2012.

There's just one problem.  The statistics don't appear to have any solid relationship to reality.

Most ratings, as in 2011, fell between the extreme ratings of True and Pants On Fire.

Ratings for the GOP/conservative fact checks broke down like this: 26 True, 22 Mostly True, 32 Half True, 14 Mostly False, 16 False and eight Pants On Fire.

Ratings for the Democratic/liberal fact checks broke down like this: 10 True, 14 Mostly True, 23 Half True, 10 Mostly False, 15 False and four Pants On Fire.

For fact checks for groups and individuals we labeled as "other, " the ratings broke this way: seven True, 14 Mostly True, eight Half True, eight Mostly False, eight False and three Pants On Fire.


It's gotta be the glasses. 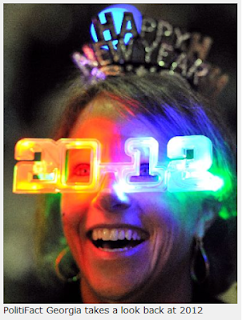 Going by the numbers appearing on its website, PolitiFact Georgia did less than 160 fact checks in 2012.  Tharpe gives the number 242.  Looking at all the "Truth-O-Meter" ratings, the site gives 20 per page in reverse chronological order.  On the eighth page of results we reach 2011.  Toss in 36 promises from Gov. Nathan Deal and we get to 196, not that PolitiFact Georgia has actually done that many ratings of Deal's promises.

Tharpe isn't from outer space simply with respect to the total number of stories.  None of it adds up, so far as I can tell.  Add Tharpe's total stories for Democrats and Republicans and we end with a total of 194 stories--just two short of the inflated total we get by rounding up to 160 and adding in Deal's promises.  And that doesn't count an additional 48 stories from Tharpe's "other" category.

If there's one saving grace, at least the total of all those stories does agree with Tharpe's overall total of 242 stories.  It's just hard to tell from which planet those stories originated.

Here's the tale of the numbers directly from the PolitiFact Georgia website for 2012:

I emailed Tharpe asking about the discrepancy.  He answered that PolitiFact Georgia keeps "a very accurate count" and confirmed that PF Georgia counted stories from PolitiFact national as well as those from the "Deal-O-Meter."  We've already touched on the problems with those methods.

On Jan. 3 I wrote again to Tharpe:


When I added together your three breakdowns of stories in the classes "Republican," "Democrat" and "other" the totals agreed with your overall total.  But all three classes are broken down into "Truth-O-Meter" ratings like "True" and "Mostly False."  There are no ratings like "Promise Kept" in those groups. Could you explain how the "Deal-O-Meter" claims fit with the total of 242 fact checks?


When Tharpe first replied he said I could phone him if I needed more help with the numbers. Perhaps it is because I contacted him again by email instead of by phone that the message remains unanswered.
Posted by Bryan White at 9:30 PM