We started a research project a couple of years ago, focusing on the proportion of all false statements PolitiFact places in its "Pants on Fire" category.  PolitiFact has never provided any objective criterion for categorizing a statement as "Pants on Fire," so our research hypothesizes that PolitiFact's use of the rating serves as a reasonable measure of partisan bias. 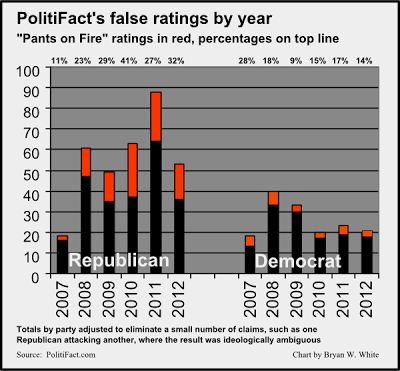 Remember that PolitiFact offers no objective means for distinguishing between the two ratings.

FALSE – The statement is not accurate.

This year's numbers carry a couple of implications for the popular theories PolitiFact's defenders bring to bear against criticisms of the fact check organization.

The ratings reflect reality, which is biased to the left


Figuring the numbers for state operations into the total obliterates the PoF Bias number trend for PolitiFact national.  So Democrats from Tennessee don't lie more, but when they lie look out 'cause it's likely to be a gigantic whopper?  Who buys it?

State franchises produce numbers all over the map.  At least with respect to the application of the "Pants on Fire" rating, this is more consistent on its face with the numbers reflecting something about the individual PolitiFact operations, not differences in political truth-telling from state to state.


The PoF Bias number came down slightly in 2011 and 2012 compared to the previous two years.  The primary season offers no obvious explanatory value at all with respect to "Pants on Fire" differentials.

The simple, parsimonious explanation for the data comes from the ideology of the PolitiFact staff combined with the flow of news.

Given the wide variation among the state franchises, it is astonishing (without employing the theory of journalistic bias) for PolitiFact to obtain the consistency it has achieved over the past three years in using the "False" and "Pants on Fire" ratings on claims from Democrats.  The recent three year trend resembles a quota.

PolitiFact is biased.  The bias in the application of the "Pants on Fire" rating is just one example of it.
Posted by Bryan White at 12:08 AM