On Friday May 24 PolitiFact posted a fact check of Sen. Mitch McConnell (R-Ky.).  I won't quote from it because PolitiFact, perhaps only temporarily, has scrubbed the story from its website with apparently only an announcement on Twitter in explanation:

PolitiFact later tweeted that it would publish the revised item next week.  We'll see.

PolitiFact rated "Mostly False" a claim from McConnell that HHS Secretary Kathleen Sebelius had forbidden insurance companies from sending information to policyholders about the effects of Obamacare.  Then Michael F. Cannon happened.  Cannon sent out a tweet of his own:

Cannon's URL led to his 2010 article "Secretary Sebelius Slips on the Brass Knuckles," where he detailed Sebelius' demands that insurers not communicate to policyholders information about the Affordable Care Act she considered false or misleading.

I ran across the McConnell rating on PolitiFact's Facebook page that afternoon, well after Cannon had tweeted about it.  I spot-checked the story as I sometimes do.  The story claimed a GAO report said the HHS office "in general" acted properly in responding to what it regarded as a misleading taxpayer-funded message the insurer Humana sent out to Medicare Advantage policyholders.

I looked at the report.  I confirmed that PolitiFact reported more-or-less accurately that the report "in general" found nothing amiss in the handling of situation.


Although CMS’s actions generally conformed to its policies and procedures, the September 21, 2009, memorandum instructing all MA organizations to discontinue communications on pending legislation while CMS conducted its investigation was unusual. Officials from the MA organizations and CMS regional offices that we interviewed told us they were unaware of CMS ever directing all MA organizations to immediately stop an activity before CMS had determined whether that activity violated federal laws, regulations, or MA program guidance. When asked about this directive, officials from CMS’s central office stated that, given the degree of potential harm to beneficiaries, the action was appropriate for the circumstances.

I posted this evidence to PolitiFact's Facebook page, arguing that PolitiFact's story was more misleading than McConnell's statement.

As it happens, PolitiFact scrubbed its Facebook page of the link to the scrubbed article at its main website.  So those Facebook comments are gone along with PolitiFact's wall post about its McConnell article.  Mostly gone, that is.  We have a few screen captures. 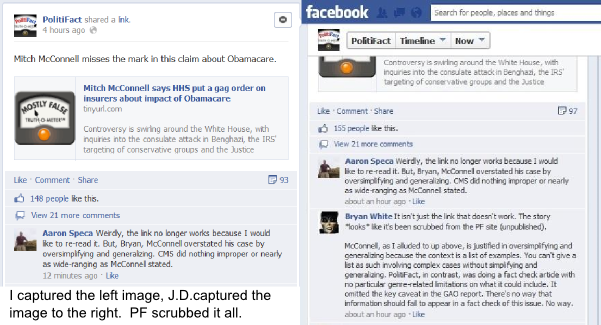 I argue that a reporter's background knowledge and ideology predispose the reporter to make mistakes of this type--missing obvious evidence mentioned in a source document--in cases where that ideology is threatened or attacked.  This applies even if journalists otherwise keep their ideology secret.

This was a big mistake.  Journalistic organizations do not lightly pull entire articles from a website.  Count it as yet another evidence helping to show PolitiFact's liberal bias.

And now we'll get another opportunity to gauge PolitiFact's transparency as it deals with a big mistake.  The past record isn't particularly good.

J.D. points out something that helps cinch the stink factor on PolitiFact's move to unpublish.

The article I provided about unpublishing stories includes quoted material from Craig Silverman.  Silverman works for the Poynter Institute, which owns the Tampa Bay Times and PolitiFact.

Here's Silverman in his Poynter Institute "Regret the Error" column dealing with issue of pulling a story offline (leading off with a quotation from the Washington Post):

* We should never “unpublish” stories from the Web. Once a story is up, however, the content can be removed with the approval of a senior editor. In those rare cases when we remove the content of a story from the page, it must be replaced with an editor’s note explaining the reason for the deletion. For example if an embargo has been broken, the note would read: “Editors’ Note: This article was published inadvertently and has been removed.”

This is the right standard when it comes to unpublishing. First of all, you try to never unpublish. But if you do have to remove content, be sure to publish an explanation/apology at the same URL.

Here's what I don't want to see:  "We did follow our guidelines.  We published an explanation/apology to the same URL.  A few days after we unpublished." 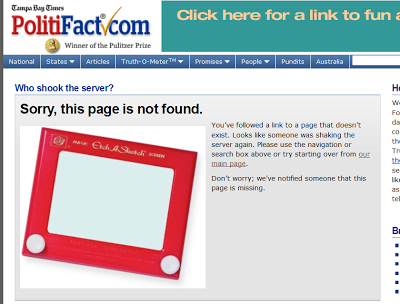