Nothing To See Here: Norman Ornstein and the magic of compound interest

I just ran across a post at Power Line Blog about Norman Ornstein's endorsement of giving government cash to babies.

Power Line's John Hinderaker wrote about the astonishingly errant math Ornstein used while endorsing the Kidsave program.  Here's how Ornstein describes it in his article at National Journal:


The first iteration of KidSave, in simple terms, was this: Each year, for every one of the 4 million newborns in America, the federal government would put $1,000 in a designated savings account. The payment would be financed by using 1 percent of annual payroll-tax revenues. Then, for the first five years of a child's life, the $500 child tax credit would be added to that account, with a subsidy for poor people who pay no income. The accounts would be administered the same way as the federal employees' Thrift Savings Plan, with three options—low-, medium-, and high-risk—using broad-based stock and bond funds. Under the initial KidSave proposal, the funds could not be withdrawn until age 65, when, through the miracle of compound interest, they would represent a hefty nest egg. At 5 percent annual growth, an individual would have almost $700,000.

Is it a typo?  The total should be closer to $70,000, as a host of people have pointed out.  If it's a typo, the National Journal continues to stand behind it through a lack of correction three (going on four) days after publication. 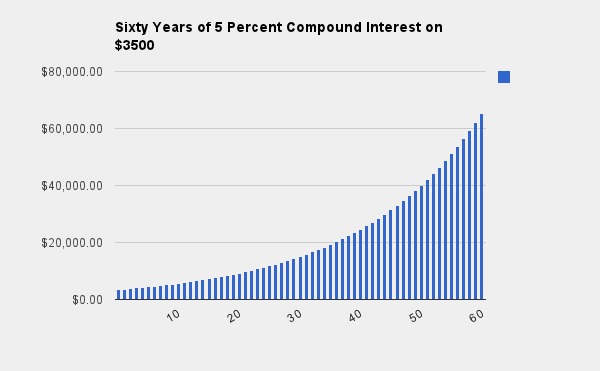 Email ThisBlogThis!Share to TwitterShare to FacebookShare to Pinterest
Labels: Nothing To See Here