2014: Another year, another laughable Lie of the Year

It's time for our annual criticism of PolitiFact's "Lie of the Year" award!

Leading off in a bipartisan spirit, let's note that every single one of PolitiFact's "Lie of the Year" award winners have contained some nugget of truth. This year, PolitiFact decisively elected to give the award to many quite different claims, each having something to do with the Ebola virus.

There's nothing like the meat tenderizer approach when wielding the scalpel of truth.

My handicapping job on the Lie of the Year award was pretty close. But PolitiFact threw us another curve this year by choosing two entries from its list of candidates and then throwing a bunch of other somewhat related claims in for good measure.

No, we're not even kidding.


[F]ear of the disease stretched to every corner of America this fall, stoked by exaggerated claims from politicians and pundits. They said Ebola was easy to catch, that illegal immigrants may be carrying the virus across the southern border, that it was all part of a government or corporate conspiracy.

The claims -- all wrong -- distorted the debate about a serious public health issue. Together, they earn our Lie of the Year for 2014.

PolitiFact's lead example, that Ebola is easy to catch, matches closely with the entry I marked as the most likely candidate. It's also the candidate that Hot Air's Noah Rothman identified as the worst candidate:


[T]he most undeserving of entries upon which PolitiFact has asked their audience to vote is a claim attributed to the syndicated columnist George Will. That claim stems from an October 18 appearance on Fox News Sunday in which Will criticized the members of the Obama administration for their hubristic early statements assuring the country that the Ebola outbreak in Africa was contained to that continent.

“The problem is the original assumption, said with great certitude if not certainty, was that you need to have direct contact, meaning with bodily fluids from someone because it’s not airborne,” Will said of the deadly African hemorrhagic fever. “There are doctors who are saying that in a sneeze or some cough, some of the airborne particles can be infectious.”

Rothman's post at Hot Air makes essentially the same points we posted to PolitiFact's Facebook page back in October: 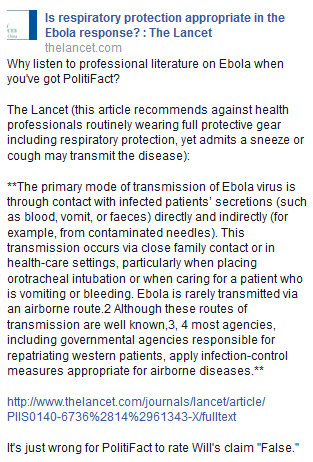 PolitiFact's ruling was an exercise in pedantry, extolling the epidemiological understanding of "airborne" over the common understanding. Perhaps Will's statement implicitly exaggerated the risk of contracting Ebola via airborne droplets, but his statement was literally true.

What else went into the winning "Lie of the Year" grab-bag?
PolitiFact tosses in a few more claims later on, but you get the idea. PolitiFact crowned every blue-eyed girl Homecoming Queen in 2014, after naming only two statements "Lie of the Year" in 2013.

Whether consciously or not, we think PolitiFact put almost as many winners on the podium as there were candidates to defuse criticism. The technique worked pretty well last year. If PolitiFact was criticized for not rating President Obama's "If you like your plan" pledge lower than "Half True," they could defend it by pointing out that Obama's "What we said was" explanation received a "Pants on Fire" rating. And if that rating was criticized as politically unimportant then PolitiFact could point out that the co-winner was a political key to gaining passage for the Affordable Care Act.

We see that same dynamic working in 2014. If critics like Rothman show George Will was right, PolitiFact can point to another dubious claim justifying the "Lie of the Year" selection, and so on--in a circle if necessary.

I should clarify that in our handicapping post PolitiFact Bias co-editor Jeff had second thoughts about the candidate he called a "lock" to win. PolitiFact's treatment of five questions associated with its "Lie of the Year" selection process had him scoffing that PolitiFact was already looking for cover.

Are we surprised PolitiFact picked a true statement as its "Lie of the Year" in 2014? No.

Are we surprised PolitiFact picked this many differing statements as "Lie of the Year" in 2014? In one sense, yes. But on the other hand it never surprises us when PolitiFact manipulates its standard--except when the result favors conservative ideology.

If the current trend continues, PolitiFact will award its "Lie of the Year" to about 100 statements in 2015.

We'll monitor the amount of buzz this selection creates. We suspect that PolitiFact's attention-getting campaign for its "Lie of the Year" award was a bit of dud this year.

Hot Air's Rothman published his assessment of the Lie of the Year before ours. Our takes are similar, and we like his concluding words: