We've promised a list of PolitiFact's top contributions to fake news--but we don't want to get into a useless semantic argument about what constitutes "fake news." For that reason, we're calling this list PolitiFact's top "fake fact checks," and that term refers to fact checks that misinform, whether intentionally or not.

PolitiFact California rated "True" Governor Jerry Brown's claim that Republican presidential candidate Mike Pence denied evolution. The truth? Pence made a statement consistent with theistic evolution without affirming or denying evolution. We called out the error here. So PolitiFact California later changed its rating to "Half True." Because if Pence did not deny evolution that means that it is half true that he denied evolution. It's fact checker logic. You wouldn't understand.


9 Social Security is not a Ponzi scheme!

PolitiFact has an established precedent of denying the similarities between Social Security's "pay-as-you-go" financing and Ponzi financing. PolitiFact reinforced its misleading narrative by giving voters advance warning that they might hear the Ponzi lie in 2016. The problem? Voters can find that supposed lie repeated commonly in professional literature, written by the kind of experts PolitiFact might have interviewed to learn the truth.

Will PolitiFact ever repent of misleading its readers on this topic?


8 LGBT the group most often victimized by hate crimes!

Attorney General Loretta Lynch declared in 2016 Lesbian-Gay-Bisexual-Transgendered folks are the group most often victimized by hate crimes. PolitiFact gave Lynch's statement a "True" rating, meaning the statement is true without leaving out any important information. The problem? Lynch's statement is only true on a per capita basis. In other words, large minority groups experience more hate crimes victimization than LGBT. But an individual in the LGBT group would more likely experience a hate crime than a member of the other groups.

How is that not significant enough to affect the rating?


7 The gender wage gap is real(ly big)! Or something!

PolitiFact Missouri's 2016 gender wage gap story, exposed here and here, did that approach one better by badly misinterpreting its source material to exaggerate the size of the gap caused by discrimination.


5 France and Germany did not think Iraq had WMD!

When former Assistant Secretary of Defense Paul Wolfowitz said the French and Germans believed Iraq had WMD, PolitiFact ruled it "Mostly False." The creepy "1984" nature of this fact check stems from PolitiFact turning lack of certitude into near-certitude of lack. And PolitiFact has to win some sort of award for avoiding French President Jacques Chirac's 2003 statement, during the approach to the war, that Iraq "probably" possessed WMD.

PolitiFact Colorado makes our list with its liberal "Mostly True" rating given to abortion rights champion Emily's List. Emily's list charged a Colorado Republican with trying to "redefine rape" in an abortion-related statute. PolitiFact Colorado apparently neglected to look up the traditional definition of rape (and its forcible/statutory distinction) to see whether it had changed thanks to the proposed wording. It had not, leaving the impression that PolitiFact Colorado essentially took the word of Emily's List at face value. Fellow PolitiFact critic Dustin Siggins led the way in flagging the problems with this PolitiFact Colorado item.


3 In California, it's easier to buy a gun than a Happy Meal!

Matthew Hoy, another one of our favorite PolitiFact critics, flagged this hilarious item. This was not a fact check, but rather a Twitter incident where PolitiFact California retweeted somebody else. California Democrat Gavin Newsom received bogus PolitiCover for claiming there are more gun dealers in California than McDonald's. Newsom tweeted out the bogus vindication under the absurd headline "FACT: It's easier to get a gun than a Happy Meal in California." Partly because a gun costs less than a Happy Meal?

2 Donald Trump is causing an increase in bullying in our schools!

PolitiFact ostensibly checked Hillary Clinton's claim that teachers noticed a "Trump Effect" that amounted to an increase in bullying behavior in the nation's schools. But anecdotal reports ought to mean close to squat in fact-checking circles, so PolitiFact accepted a motley collection of anecdotes from the left-leaning Southern Poverty Law Center as reason enough to give Clinton a "Mostly True" rating. We chronicled the numerous problems with the so-called "Trump Effect" here and at Zebra Fact Check here and here.

PolitiFact California heads the list with its second mostly fact-free fact check of Mike Pence. Back around the year 2000, when Pence was first running for the House of Representatives, he suggested that AIDS care dollars under the Ryan White Care Act should not go to organizations that celebrated behavior likely to spread AIDS. Pence said funds under the Act should go to people seeking to "change their sexual behavior." About 15 years later, Pence's statement was construed to mean that he wanted AIDS care funding to go toward gay conversion therapy. There's no serious argument supporting that notion, and Timothy P. Carney pointed that out even before PolitiFact checked the claim. But PolitiFact California gave Gavin Newsom a "True" rating for the accusation. 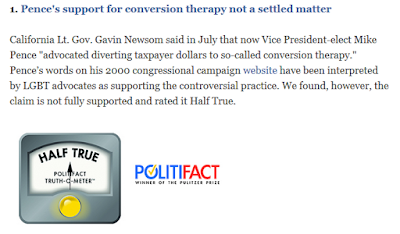