There You Go Again: PolitiFact Florida makes a hash of another gender wage gap ruling

Though PolitiFact is an unreliable fact-checker, at least one can bank on the mainstream fact-checker's ability to flub gender wage gap claims.

We hit PolitiFact on this issue often, but this latest one from PolitiFact Florida is a doozy, rivaling PolitiFact Oregon's remarkable turd from 2014. 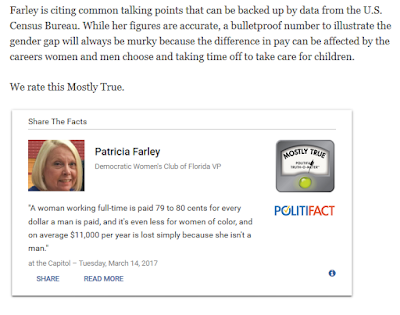 In the next-to-last paragraph of its summary, PolitiFact Florida explains that "differences in pay can be affected by the careers women and men choose and taking time off to care for children." Those aren't the only factors affecting the raw wage gap, by the way.

Yet in the ironically named "Share The Facts" version, the "Mostly True" rating blares its message aside Democrat Patricia Farley's claim the disparities occur purely based on gender ("simply because she isn't a man"). In other words, the cause is gender discrimination, not different job choices and the like--directly contradicting PolitiFact Florida's caveat. Farley didn't just leave out context. She explicitly denied the key bit of context.

So, yes, we're saying that unless Patricia Farley is ignorant about the difference between the gender wage gap and the wage gap caused by pay discrimination, she is lying, as in deliberately deceiving her audience. And PolitiFact Florida is calling her falsehood and potentially intentional deception "Mostly True."

The PolitiFact Florida wage gap fact check is below average for PolitiFact--and that's like failing to leap over a match box.

Correction March 15, 2017: Posted the intended URL for the PolitiFact Florida fact check. We had mistakenly used the URL to a related fact check concerning Donald Trump.
Posted by Bryan White at 11:19 PM