The dumping of Grayson aside, does this represent a sincere effort from PolitiFact to help improve its product?

Probably not, despite the we're-so-humble sales job from PolitiFact Executive Director Aaron Sharockman.


The two former lawmakers had been set to critique the website’s fact-checks and provide additional insight on political issues as part of a pilot program that will run through the end of April, according to a Thursday PolitiFact post announcing the hires. The post has since been deleted.

“David and Alan are both particularly qualified, we think, to critique the work of PolitiFact, because they’ve been subject to our fact-checks as members of Congress,” PolitiFact Executive Director Aaron Sharockman wrote an his initial statement.


Well-qualified to critique the work of PolitiFact! That implies that the critiques may prove valid, right?

PolitiFact said it would learn from Jolly and Grayson, though it's hard for us to prove that now that PolitiFact is disposing of the evidence. Like a good fact-checker should, I guess.

PolitiFact's founding editor, Bill Adair, did research suggesting that PolitiFact receives most of its substantive criticism from the right. Will PolitiFact allow such research to impact its choice of which narrative to promote? We doubt it.

We captured images from Sharockman's Twitter feed--ones he had so far elected not to delete. The one at the top pretty much shows PolitiFact's thinking behind this experiment. It's not about improving the product. It's about encouraging the public to trust in the existing product. 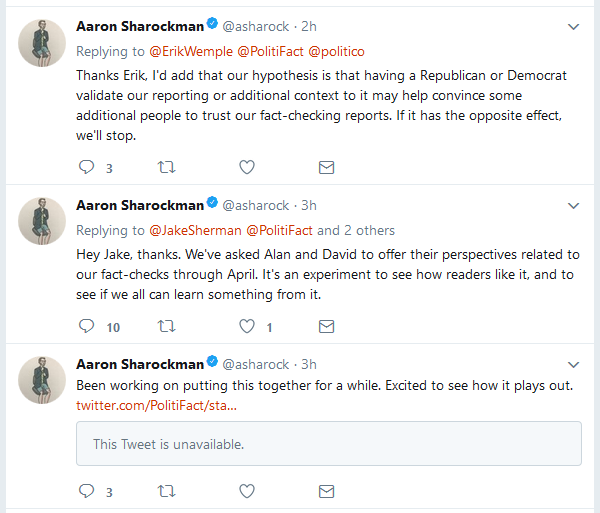 Note that PolitiFact's experiment was only slated to run through April 2018. Three months. If PolitiFact detects signs that people are trusting it less during the experiment, it will terminate the experiment.

Does that sound like a sincere effort to improve the product? Or more like a cynical ploy intended to trick people into trusting PolitiFact?

How many times do we have to say it? One gains trust by proving trustworthy. One proves one's trustworthiness through accuracy and transparency.


We wonder what it says about PolitiFact that they considered Grayson representative of a conventional Democrat voice.

We're not surprised that PolitiFact's ill-advised attempt to gain credibility resulted in more of the same deception we've come to expect. For example, un-publishing articles is somehow a sign of trustworthiness?

For years we've said PolitiFact would benefit from an inside critic of their work and suggested most of their obvious blunders would have been prevented with a heterodox voice on staff. On its face the notion of "reader advocates" seems like a step in that direction, until you realize it's just another click-seeking gimmick (Is Grayson really the top pick for any serious endeavor?).

If PolitiFact were actually sincere about gaining reader trust there's more effective ways than adding sideshow acts performed by clowns and cranks. For instance, they could unequivocally disavow their longtime use of stealth edits. That might help bring them into compliance with the International Fact Checking Network code of principles that they currently violate.

But the most obvious thing they could do to improve their image is to credibly rebut the volumes of legitimate, earnest criticism of their work. So far, PolitiFact's response to charges of bias has been to call critics "mental" or to ignore them altogether. For some reason PolitiFact does not view an honest defense of their work as a viable remedy for reader distrust.

PolitiFact's incompetent and biased editorializing has never earned credibility. Adding more clowns to the car won't change that. This "readers advocate" stunt only shows how unserious PolitiFact is about providing readers the truth.