We looked the the first column from the Democrat back on Feb. 12 and judged it pointless crap.

Republican David Jolly published his first critique on March 2, 2018. And though we were aware of charges Jolly counts as an "MSNBC Republican," we were still a bit surprised at first blush when Jolly used his column to apparently suggest PolitiFact had rendered a too-harsh judgment on a Democrat's claim about gun violence.

It's worth noting that Jolly has been busy lately promoting "common sense" gun control legislation, so maybe it was just too tempting to resist tying that political cause to his role at PolitiFact.


Rep. Deutch is said to have relied on statistics provided by The Century Foundation, a left-leaning think tank, which plainly assessed there had been "an increase of over 200%" in mass shootings since the expiration of the assault weapons ban. PolitiFact, however, rated Deutch’s statement Mostly False, largely on the basis that the commentary upon which the congressman relied was substantively challenged by other experts in the field. Presumably, had Deutch said in the town hall, "According to The Century Foundation, mass shootings went up 200% in the decade after the assault weapons ban expired," PolitiFact would have found the Congressman’s statement True on its face, while ruling the findings of The Century Foundation Mostly False.

Moreover, had PolitiFact evaluated Deutch’s statement simply on the numbers, there is ample evidence in the PolitiFact article to support a ruling of Mostly True.

Jolly's critique hits at PolitiFact's standard operating procedure. Yes, of course PolitiFact's ratings oversimplify complexities. Will writing a column pointing that out for the umpteenth time change anything?

Is that the extent of Jolly's point?  That's what his conclusion suggests:


In this case, a congressman’s statement seems to have been ruled Mostly False on two primary factors — his citing a credible think tank’s commentary on gun violence statistics, and a drawn inference by fact-checkers that may or may not have been intended in the congressman’s statement. Neither makes PolitiFact’s ruling right or wrong, but it reflects the enormous challenge faced by politicians, fact-checkers and ultimately voters in today’s political environment.

Newsflash for David Jolly: The fact checkers do not see the subjectivity of their ratings as a problem. The problem, in their eyes, is that readers do not place enough trust in fact checkers. And they recruited their "guest columnists" to help build bipartisan trust in their subjective judgments.

Jolly's critique is about as deep as Barbie's "Math is hard" critique of high school and as such works better as a soft-sell version of his gun control op-ed that we linked above. But we like it for the fact that its premise arguably strikes against the fundamental subjectivity of the PolitiFact approach.

We learned about Jolly's column through PolitiFact's Facebook page, where it featured a link to his column.

PolitiFact's main page at PolitiFact.com does a pretty awesome job of burying these columns. The reader would have to scroll near the bottom of the page and see the "Inside the Meters" section in the right sidebar.

It's literally the last element on the right sidebar, and there's no way to directly reach the "Inside the Meters" posts using the navigation buttons at the top of the PolitiFact website. 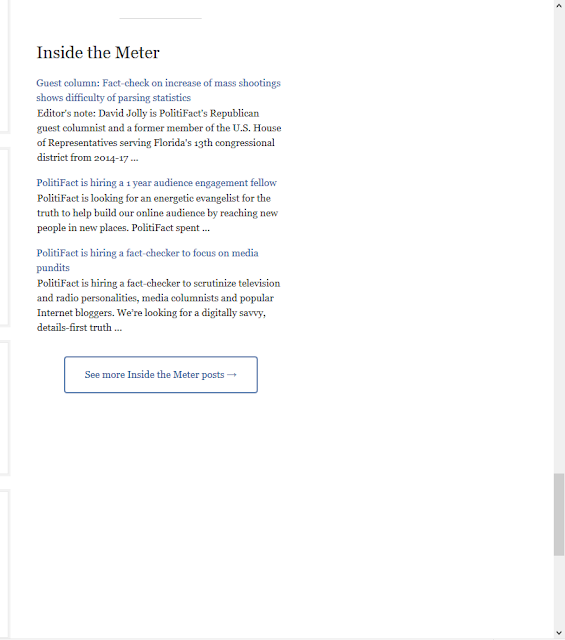 Unsurprisingly, PolitiFact uses an "even the Republican thinks we were too tough on the Democrat" frame in its Facebook announcement of his column: 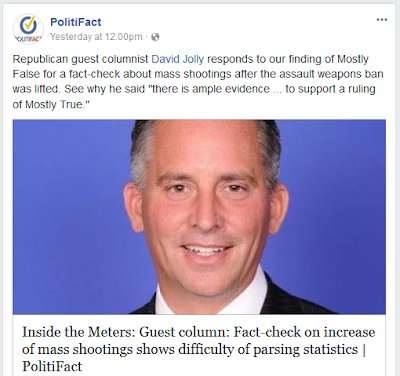 
See why he said "there is ample evidence ... to support a ruling of "Mostly True."

PolitiFact left out enough context of Jolly's column to earn its own "Half True" (bold emphasis added):


Moreover, had PolitiFact evaluated Deutch’s statement simply on the numbers, there is ample evidence in the PolitiFact article to support a ruling of Mostly True.

Sometimes PolitiFact judges simply on the numbers, sometimes it doesn't. No objective, nonpartisan principle appears to guide the decision.

We suggest PolitiFact's manipulation of Jolly's statement misleads its audience about Jolly's point. Jolly's overall point, albeit delivered weakly, was the difficulty of making the ratings (thanks to subjectivity). PolitiFact spins that into the Republican saying PolitiFact was too hard on the Democrat.

PolitiFact's spin helps stuff Jolly's column into a frame that assists PolitiFact's purpose of fluffing up its own credibility: They're so nonpartisan! They gave a Democrat a "Mostly False" when a Republican said he should have had a "Mostly True!!"

Cherry-picking the source of a claim

Jolly's gripe, and his solution to it, betray a gross ignorance of the way his employer works.


"PolitiFact would have found the Congressman’s statement True on its face, while ruling the findings of The Century Foundation Mostly False."

Jolly finds fault with PolitiFact giving the False rating to Rep. Deutch, when Deutch was simply repeating a claim made by a (Jolly's words) "credible think tank." He argues the rating should have gone to the think tank.

That's nice, but it's also a problem spelled out on these pages for nearly a decade. One of the ways  PolitiFact shows its liberal lean comes from its choice of the source for a claim. We've called that "attribution bias."

In 2011, when The New York Times, ABC, and NPR all repeated a bogus number published in an official Inspector General report regarding $16 muffins, PolitiFact added a "False" rating to conservative Bill O'Reilly's "report card."

In 2012, when Time, CNN, and the New York Post published a faulty stat from a dubious research firm, it was conservative media group American Crossroads that earned the demerit on its PolitiFact scorecard.

More recently in 2017 PolitiFact ignored a widely publicized liberal talking point espoused by numerous talking heads in the national media for months, and then quickly jumped in to deem it "False" within a day of Donald Trump repeating it.

Though in Deutch's case PolitiFact gave the rating to a Democrat instead of the think tank responsible for the stat, it still exemplifies PolitiFact's subjective, cherry-picking process for assigning its ratings. That Jolly seems to think his observation is novel only highlights his own naivety about PolitiFact.

Jolly's overall critique comes off as compelling as warm beer. It's almost as if he quickly cobbled together the column immediately after being criticized for not producing a critique during the first month of PolitiFact's new "readers advocate" feature.

We're not sure what value Jolly adds to the operation here, unless being duped into being a real life version of PolitiFact's lame "we get it from both sides!" defense is his goal. He didn't provide any insight or commentary that hasn't been offered in a better form on this blog for the last several years. We think having an in-house, right-leaning critic at PolitiFact is a good idea and think it could improve its work immensely. So far it appears Jolly is not the vehicle for the improvement.

In any event, congratulations to Jolly for finding a way to get his first critique of PolitiFact from the right to dovetail so nicely with his conservative efforts to support ... gun control.