Is it okay for fact checkers to rely on biased experts for their findings?


The failure to declare to their readers that two individuals who assisted Science Feedback, not in writing the fact-check but in reviewing the evidence, had positions within advocacy organizations, and the failure to clarify their role to readers, fell short of the standards required of IFCN signatories. This has been communicated to Science Feedback.

Perhaps it's fine for fact checkers to rely on biased experts so long as those experts do not hold positions in advocacy organizations.

The fact check itself hardly deals with the substance of Barr's claim that the "Crossfire Hurricane" investigation of possible collusion between the Trump campaign and Russia was started on the thinnest of evidence. Instead, PolitiFact sticks with calling the decision to investigate "justified" by the Inspector General's report while omitting the report's observation that the law sets a low threshold for starting an investigation (bold emphasis added).


Additionally, given the low threshold for predication in the AG Guidelines and the DIOG, we concluded that the FFG informat ion, provided by a government the United Stat es Intelligence Community (USIC) deems trustworthy, and describing a first-hand account from an FFG employee of a conversation with Papadopoulos, was sufficient to predicate the investigation. This information provided the FBI with an articulable factual basis that, if true, reasonably indicated activity constituting either a federal cri me or a threat to national security, or both, may have occur red or may be occurring. For similar reasons, as we detail in Chapter Three, we concluded that the quantum of information articulated by the FBI to open the individual investigations on Papadopoulos, Page, Flynn, and Manafort in August 2016 was sufficient to satisfy the low threshold established by the Department and the FBI.

The "low threshold" is consistent with Barr's description of "thinnest of suspicions" in the context of prosecutorial discretion and the nature of the event that supposedly justified the investigation (the Papadoupolous caper)*.

But in this post we will focus on the experts PolitiFact cited.

Rosa Brooks, professor of law and policy at Georgetown University, told us that Barr’s assessment that the suspicions were thin "appears willfully inaccurate."

"The report concluded precisely the opposite," she said. "The IG report makes it clear that the decision to launch the investigation was justified."

If PolitiFact were brazen enough, it could pick out Brooks as a go-to (biased) expert based on her Twitter retweets from Dec. 10, 2019. 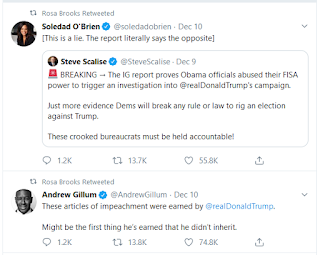 Brooks' tweets also portray her as a Democrat voter. So does her pattern of political giving.

Jennifer Daskal, professor of law at American University, agreed. "Barr’s statement is at best a misleading statement, if not a deliberate distortion, of what the report actually found," she said.

Daskal's Internet history shows little to suggest she pre-judged her view on Barr's statement. On the other hand, it seems pretty plain she prefers the presidential candidacy of Pete Buttgieg (one example among several). Plus Daskal has tended to donate politically to Democrats.

PolitiFact contacted Litt for his expert opinion but did not mention him in the text of the fact check.

We deem it unlikely PolitiFact tabbed Litt to counterbalance the leftward lean of Brooks and Daskal. Litt was part of the Obama administration and his appointment carried an unusual political dimension to it. Litt failed his background check but was installed in the Clinton Justice Department in a roundabout way.

Litt, like Brooks and Daskal, gives politically to Democrats.


So what's the problem?

We think it's okay for PolitiFact to cite experts who lean left and donate politically to the Democratic Party. That's not the problem.

The problem is the echo-chamber effect PolitiFact achieves by choosing a small pool of experts all of whom lean markedly left. As we've noted before, that's no way to establish anything akin to an expert consensus. But it serves as an excellent method for excluding or marginalizing contrary arguments.

It's not like those are hard to find. It seems PolitiFact simply has no interest in them.

*It's worth noting that the information Papadoupoulos shared with the Australian, Downer, came in turn from the mysterious Joseph Mifsud.
Posted by Bryan White at 12:57 PM