Everybody knows about the gender pay gap, right?

It's the statistic Democrats habitually misuse to amplify their focus on "equal pay for equal work." Fact checkers like PolitiFact punish that traditional deception by rating it "Mostly True" most of the time, or sometimes just "True."

Such articles might more appropriately wear the label "unexplainer."

PolitiFact starts out with exactly the kind of ambiguity Democratic Party leaders love, obscuring the difference between the raw gender wage gap and the part of the gap (if any) caused by gender discrimination:


The disparity in how much women make compared with men comes up often in the political discourse, tagged with a call to action to help women’s paychecks catch up.

Running just above that sentence the featured image directs readers toward the gender discrimination explanation for the gender pay gap. Plausibly deniable? Of course. PolitiFact didn't mean it that way or something, right? 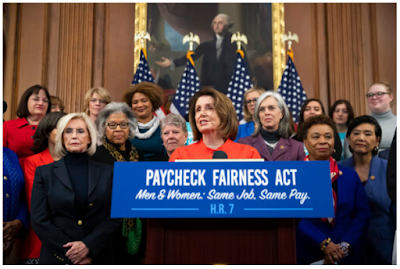 PolitiFact goes on to tell its readers that a number of Democrats have raised the gender pay gap issue while on the campaign trail. The paragraph contains four hotlinks:


Several leading Democratic presidential candidates recently highlighted one of the biggest imbalances — saying that a Latina woman must work 23 months to make the amount a white man makes in one year, or that they make 54 cents on the dollar.

Each of the statements from Democrats highlighted the gender pay gap in an ambiguous and misleading way. None of the statements bothered to distinguish between the raw pay gap, caused by a variety of things including women working fewer hours, and the hard-to-measure pay gap caused by employers' sexual discrimination.

The claim from Mayor Pete Buttigieg was pretty much incoherent and would have made great fodder for a fact check (54 cents on the dollar isn't enough to live on? Doesn't that depend on the size of the dollar in the comparison?).

PolitiFact highlighted the version of the claim coming from Sen. Sanders:


Latina women in America must work for 23 months, on average, to make what white men earn in a year.

Equal pay is not radical. It is not extreme. It's an issue of basic justice.

Sanders' use of the gender pay gap fits the standard pattern of deception. He leads with a figure from the raw wage gap, then assures the audience that "Equal pay is not radical ... It's an issue of basic justice."

But Sanders is misleading his audience. "Equal pay for equal work" isn't radical and may count as an issue of basic justice. But equal pay regardless of the work done is very radical in the United States. And that's what Democratic Candidates imply when they base their calls for equal pay on the disparities in the raw gender wage gap.

If only there were fact checkers who could explain that deception to the public!

But, no, PolitiFact does not explain Sanders' deception.

In fact, it appears PolitiFact has never rated Sanders on a claim related to the gender wage gap.

Should Democrats admit they want equal pay for unequal work, it's likely the American people will let them know that the idea is not mainstream and not an issue of basic fairness.

PolitiFact ought to know that by now. But you won't find it in their fact checks or PolitiSplainers dealing with the gender wage gap.

How Big is the Pay Gap from Discrimination?

Remarkably, PolitiFact's PolitiSplainer on the pay gap almost takes a pass on pinning down the role discrimination might play. One past PolitiSplainer from 2015 actually included the line from the CONSAD report's Foreword (by the Department of Labor) suggesting there may be no significant gender discrimination at all found in the raw wage gap.

In the 2019 PolitiSplainer we got this:


We often hear that discriminatory practices are a reason why on average women are paid less than men. Expert say it’s hard to measure how much of a role that discrimination plays in the disparity.

Clark cited education and race as other factors, too.

Such a weak attempt to explain the role of discrimination in the gender pay gap perhaps indicates that PolitiFact's aim was to explain the raw gender wage gap. Unfortunately for the truth, that explanation largely stayed within the lines of the traditional Democratic Party deceit: Mention the raw gender wage gap and then advocate legislation supposedly helping women receive equal work for equal pay.

Supposedly neutral and objective fact checkers approve the deception, so it must be okay.

We have no reason to suppose mainstream fact checkers like PolitiFact will stop playing along with the misdirection.
Posted by Bryan White at 10:01 AM