That's obvious from PolitiFact's presentation of its June 29, 2020 of a Facebook meme, right? 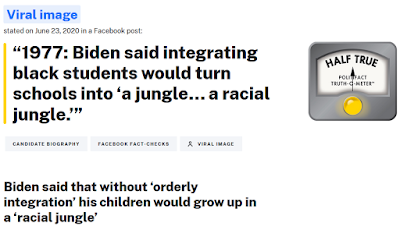 PolitiFact Bias tips its hat to Newsbusters, which highlighted this item with a July 10, 2020 article of its own. Newsbusters correctly noted that PolitiFact applied plenty of spin to its article, producing an emphasis on Biden's progressive vision of "orderly integration"--whatever that was supposed to mean--while de-emphasizing the negative.

What is 'Orderly Integration'?
What was Biden's view of the "orderly integration" that was preferable to forced busing? PolitiFact relied on a secondary source, The New York Times, for that information:

Biden argued that housing integration was a better way to desegregate public schools though it would take much longer to implement than a busing plan, the (New York Times') story says.

That's one way to characterize what the Times' story said. Your mileage may vary (ours did):

In a television interview, Mr. Biden called busing an “asinine concept” and said he had “gotten to the point where I think our only recourse to eliminate busing may be a constitutional amendment.” As an alternative, he argued for putting “more money into the black schools” and opening up housing patterns, warning that otherwise “we are going to end up with the races at war.”

“You take people who aren’t racist, people who are good citizens, who believe in equal education and opportunity, and you stunt their children’s intellectual growth by busing them to an inferior school and you’re going to fill them with hatred,” he said in the interview.

We see nothing in the Times' article showing Biden predicted "white flight" as a result of forced busing.

The Times mentioned a "television interview" of Biden as its source. The Times did not offer any detail regarding who produced or broadcasted the interview.
What was the Times' Source?
We found a Vox story mentioning a 1975 television interview featuring Biden and touching on the subject of busing. But the supporting link led to a Washington Post archive of a Congressional Record entry of TV News--The People Paper's print interview with Biden. We found no evidence that interview ever aired on television. We suspect Vox and The New York Times' concluded from the newspaper's name that the interview was aired on television. We had little luck finding information about the publication. But the text of the interview supports that it served as the Times' source:

"It ls true that the white man has suppressed the black man, and continues to suppress the black man. It is harder to be black than to be white. But you have to open up avenues for blacks without closing avenues for whites; you don't hold society back to let one segment catch up. You put more money into the black schools for remedial reading programs, you upgrade facilities, you upgrade opportunities, open up housing patterns."

The interview fails to tell us what "open up housing patterns" means. We hoped Googling the phrase would help, but discovered that searching for the specific phrase while excluding "Biden" returned zero hits. Perhaps one day a journalist will think to ask Biden what he was talking about.
Did Biden use 'coded language'?
We were struck by the fact that the fact checkers could not find an expert to denounce Biden's reference to the "racial jungle" as a racist "dog whistle" or "coded language."
To be clear, we hold that any labeling of something as "coded language" or a "dog whistle" needs solid evidence in support. But journalists tend to find it easy to dispense with such formalities when they can find experts or activists willing to make the charge.
Biden's Words Turned on Their Head
PolitiFact's skillfully twisted subheading makes it look like Biden's feared a "racial jungle" would occur without ill-defined "orderly integration." That wording suggests to readers that Biden would have used racial integration to avoid that "racial jungle."

But Biden was saying using forced busing to achieve integration was not orderly and would backfire.
PolitiFact could have avoided the definitional muddle by summarizing Biden using well-understood phrases: Biden believed racial integration using forced busing would lead to his children growing up in a "racial jungle."
PolitiFact avoided using plain speech to communicate Biden's position to its readers.
We got forced busing. Did we get a "racial jungle"?
It looks like PolitiFact was trying to do Biden a favor.
Posted by Bryan White at 1:06 PM