We have noted that PolitiFact has over the years tried to minimize the impression that it often publishes things that need correction. And PolitiFact's lengthy description of its corrections policy contains loopholes that give its editors a hand in lessening the appearance of fact checker error.

The Case in Point

When PolitiFact tweeted out that misinformation to its Twitter audience someone quickly noticed the mistake:

They are facing runoff elections, not recall elections 🙄

Allen wasn't the only person to highlight the mistake. But the mistake stayed on in PolitiFact's tweets and in the box summarizing the article at the main PolitiFact website (highlights added for emphasis): 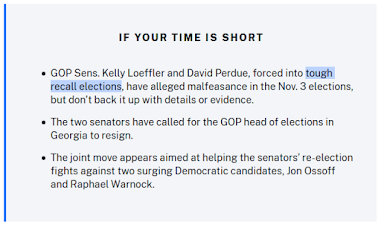 To be clear, a recall election is not the same thing as a runoff election.

By November 16 PolitiFact had corrected its error, yet without admitting any wrongdoing.

The page received no "corrections or updates" tag and features no correction or update notice.

How can that be, given that PolitiFact has, according to its editor, one of the most robust and detailed corrections policies in journalism?

It's easy-peasy. And that's because the robust details in the corrections policy are ambiguous. The details make readers think PolitiFact is transparent about its mistakes when in reality the policy features (intentional?) loopholes that allow the fact checker to obscure its history of embarrassing mistakes.

The mistake on "recall elections" was likely treated under this section of PolitiFact's policy:

By counting the use of "recall" where "runoff" was meant as a typo, grammatical error, misspelling or other small error, PolitiFact ends up deceiving its audience about the robustness of its corrections policy. When we read (in the same statement of principles) that PolitiFact corrects its errors "with appropriate transparency" we expect that to include an admission when PolitiFact finds itself guilty of spreading misinformation.

PolitiFact undeniably spread misinformation. People who saw only PolitiFact's early tweets highlighting its article were misinformed that Loeffler and Perdue were facing recall elections. Those whose time was short and read only the article summary were similarly misinformed. And PolitiFact, contrary to its commitment under the principles of the International Fact-Checking Network, which it professes to follow, took no steps to make sure those who were misled had the corrected version brought to their attention.

That's how these Pulitzer Prize-winning journalists operate. This has always been part of their approach to corrections.

It's embarrassing to mix up "runoff election" with "recall election." Therefore, PolitiFact buries its mistake as though it merely mixed up "its" with "it's."

Correction Nov. 16, 2020: In the fifth-to-last paragraph we committed an error similar to PolitiFact's stating that PolitiFact "misinformed that Loeffler and Perdue were facing runoff elections." In fact, PolitiFact misinformed its readers that Loeffler and Perdue were facing recall elections and not runoff elections. Hat tip to Matthew Hoy for catching the error and alerting us to its existence. The problem is fixed with this update.