Why does PolitiFact claim it allows license for hyperbole?

It makes sense for a fact checker to account for figures of speech such as hyperbole. And PolitiFact plainly states in its description of its principles that it allows license for hyperbole (bold emphasis added):

In deciding which statements to check, we consider these questions:

• Is the statement rooted in a fact that is verifiable? We don’t check opinions, and we recognize that in the world of speechmaking and political rhetoric, there is license for hyperbole.

For us, the mystery is why PolitiFact makes this claim and then blatantly fails to honor it.

Today we add another example to the collection. 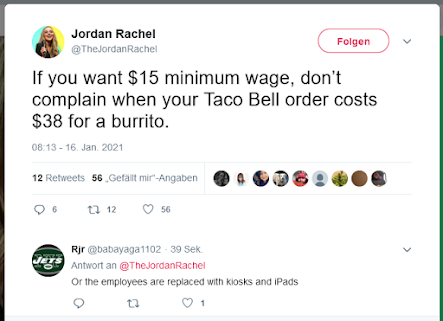 Rachel's tweet fits perfectly the form of hyperbole. She chose an extremely high price for the future burrito and took care to offer no clear sign the statement was intended to be taken literally. One would encourage literal interpretation by plainly stating something like "Increasing the minimum wage to $15 will result in $38 burritos."

PolitiFact unfairly manipulates Rachel's claim. Her claim is an if/then statement emphasizing the truth that the $15 minimum wage increase counts as an inflationary policy.

Hyperbole is not mere exaggeration

As a figure of speech, hyperbole is not the same thing as mere exaggeration. If it was, then fact checkers shouldn't need to take it into account. They could simply show in factual terms how far off the exaggeration fell from the truth and leave it at that.

Hyperbole counts as common figure of speech. Perhaps the modern journalist simply understands it poorly. In the interest of public education, we recommend to our readers the account of hyperbole at YourDictionary.com:

Hyperbole, from a Greek word meaning “excess,” is a figure of speech that uses extreme exaggeration to make a point or show emphasis. It is the opposite of understatement.

You can find examples of hyperbole in literature and everyday speech. You wouldn’t want to use it in nonfiction works, like reports or research papers, but it’s perfect for creative writing and communication, especially when you want to add color to a character or humor to a story.

We encourage readers to click the link and read through it all.

As for the fact checkers at PolitiFact, we see no sign at all they considered interpreting Rachel's statement as hyperbole.

The summary section of the fact check fairly displays the rush to judgment:

Rachel said a $15-an-hour minimum wage would raise the price of a Taco Bell burrito to $38.

This claim is countered by available evidence, including the current burrito prices at Taco Bell locations in cities and counties where a $15 minimum wage is in effect. Four economists characterized the claim as a far-off estimate at odds with economic theory.

We expect a conscientious fact-checking organization to make a plausible attempt to achieve consistency between policy and practice. If the policy is A and the practice is B, change one of them to match the other.