PolitiFact: How can we rig this abortion fact check to help President Biden? Part II

Lo and behold, PolitiFact made changes to the fact check we critiqued in our previous post.

Recall that we lodged three main criticisms of PolitiFact's "Mostly True" confirmation of President Biden's claim the Supreme Court's Dobbs decision made the United States an outlier among developed nations.

Let's start with the "clarification" notice and work from there:

CLARIFICATION, June 27, 2022: This story has been clarified to reflect that the United Kingdom, which contains Northern Ireland, is a G-7 nation. It has also been updated to describe current abortion laws in Northern Ireland.

What does PolitiFact's statement of principles prescribe for clarifications and updates?

Oops! PolitiFact's statement of principles offers no procedure for doing a clarification!

Updates – From time to time, we add additional information to stories and fact-checks after they’ve published, not as a correction but as a service to readers. Examples include a response from the speaker we received after publication (that did not change the conclusion of the report), or breaking news after publication that is relevant to the check. Updates can be made parenthetically within the text with a date, or at the end of the report. Updated fact-checks receive a tag of "Corrections and updates."

We think it clear that this policy calls for newly added "update" material within the original text to occur with clear cues to the reader where the material was added ("parenthetically within the text with a date"). Otherwise, the new material occurs at the end of the item after the update notice.

It's easier to find PolitiFact updates done incorrectly than ones done correctly. But this example shows an update done the right way: 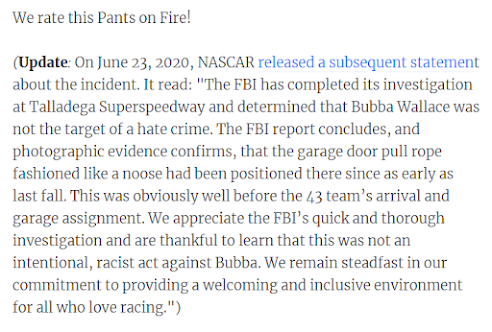 The method shown communicates clearly to readers how the article changed.

This is infinitely more transparent than PolitiFact's common practice of an update notice at the end saying, in effect "We changed stuff in the story above on this date."

Understood correctly, PolitiFact corrected its story. It fixed its mistake in misleadingly identifying Great Britain as a member of the G7. And the "update" was not new information. It was information PolitiFact should have included originally but mistakenly did not.

The fact check continues to do readers a disservice by failing to inform them that the U.K. in 2019 forced Northern Ireland, via special legislation, to permit abortion. That still-missing fact contradicts PolitiFact's claim that members of the G7 other than the United States"have national laws or court decisions that allow access to abortion, with various restrictions." The legislation forcing Northern Ireland to permit legal abortion was not a national law, nor was it a court decision.

The law is specific to Northern Ireland.

We'll end with an image we created for Twitter. It's an image from the Internet Archive Wayback Machine, using its comparison feature. Text highlighted in blue was changed from the original text, and we added red lines under the part of PolitiFact's fact check that remains false. 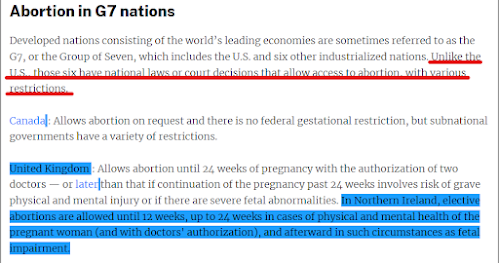