Here are two more examples of PolitiFact's hilarious inability to reach rational conclusions as it goes about its business.

On April 3, a PolitiFact item appeared with the following headline:  "Ex-Sen. Fred Thompson says Obamcare could raise premiums enough to pay for a new Ford Explorer."

But reading just a little deeper into the story, it turns out that Thompson's claim wasn't serious at all.

Here's how PolitiFact reports what Thompson literally said, instead of the attempted paraphrase:

"Report: Obamacare could raise ins premiums by 200%. It's the ‘A-Ford-able Care Act’ -- your insurance costs as much as a new Explorer."

First clue:  It's from Twitter, renowned for its 140-character limit.  Second clue:  "Ford" set apart by hyphens in "Affordable."  It's a joke, and PolitiFact hints that it's a joke by referencing the wisecracks Thompson offered while appearing as Arthur Branch on "Law & Order."

Why fact check a joke?

It makes sense to fact check a joke if the joke is supposed to convey a particular truth worth fact checking.  Was Thompson communicating that insurance premiums will cost the same as a new Explorer?  Isn't that line obviously part of the joke?

Thompson's Twitter feed is substantially made up of similar jokes.  He mentions a fact, then riffs on it for laughs.  Have a look at the tweet PolitiFact graded along with the two before and the two after. 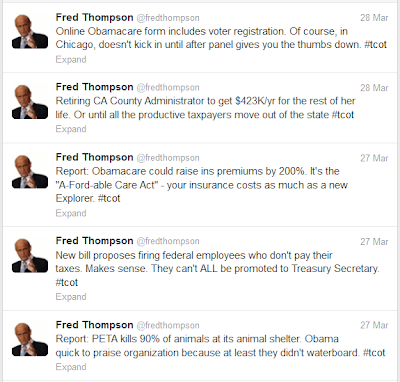 It's a pattern with Thompson.  Offer a factoid, crack a joke.  The only facts worth checking are those Thompson expects readers to take seriously, which in this set means the factoid in the first line of each tweet.  PolitiFact, instead of looking at whether insurance premiums could rise as much as 200 percent, looked at the joke end of the statement.  Thompson gets a "False" instead of a "True."  Go figure.

We note that Thompson has written about PolitiFact's focus on his joke.

On April 10, PolitiFact put some bizarre spin on former vice president Dick Cheney's weekend appearance on Fox News, where he offered remembrance of the late Margaret Thatcher.  PolitiFact begins its quotations with the following:


Van Susteren: "But there's that famous quote where, apparently, she told President Bush 41 not to go wobbly."

When I hear the exchange it never occurs to me that Cheney is saying Thatcher never said "Don't go wobbly."  It seems to me that Cheney was telling Van Susteren that President Bush never went wobbly and people should not interpret Thatcher's comment that way.  As Cheney said immediately after:


There was never any doubt about what the president was doing. He didn't need any b[u]cking up.


These types of PolitiFlubs do not happen rarely.

Check out how PolitiFact completely invented a claim that Thompson never made:

Even if we disregard Thompson's comical context, he never claimed that your premiums would rise by $30,000. That's a total distortion on the part of our Pulitzer winning pals. Thompson's claim, even if taken seriously, was that your insurance policy in total would equal the value of an Explorer, not that its price would rise that much.

And once again, we see PolitiFact playing games with quotation marks:

Here's what Thompson tweeted: "It's the ‘A-Ford-able Care Act’ -- your insurance costs as much as a new Explorer."

Note that PolitiFact added the word premiums, making Thompson's claim seem more outlandish. This, by the way, is exactly what they did to Mitt Romney in their bogus Lie of the Year rating:

PolitiFact took the Romney ad's claim; "sold Chrysler to Italians who are going to build Jeeps in China," which was and is entirely accurate, then added the words at the cost of American jobs, something the Romney ad never claimed, then slapped a Lie of the Year award on their own invention.

Whether it's shoddy work or intentional partisan spin, this type of nonsense should prevent PolitiFact from being taken seriously.