PolitiFact editor: "They're both the Lie of the Year."


Yesterday PolitiFact awarded its "Lie of the Year" for 2013.  The award was announced on "The Lead with Jake Tapper."

On Dec. 4 we predicted that the winner would be President Obama's 2013 claim that he said people could keep their health insurance plan if it hadn't changed since the law was passed.  We believed PolitiFact was using Obama's earlier claim that people could keep their health plans ("Period") to help sell people on the political impact of the president's "What we said was" claim.

On Dec. 10 I accepted that PolitiFact's presentation of its "Lie of the Year" nominees made it certain that "What we said was" did not receive a nomination, but "If you like your plan" was the true nominee even though PolitiFact hadn't rated it in 2013 and it had received a "Half True" rating in 2012.  We charged that PolitiFact was using the "Pants on Fire" rating for "What we said was" to make the selection of a statement from 2012 more palatable to readers.

We were wrong, along with pretty much everybody.  The "Lie of the Year" for 2013 ended unexpectedly in a tie!


Newsbusters relates the key part of the conversation:


"So, the lie about what he originally said is Lie of the Year?" asked Tapper.

"They're both Lie of the Year, because this is something that unfolded over a bunch of years," Drobnic Holan answered.

PolitiFact combined the two statements into one candidate.  But didn't explain that to readers voting in their reader's poll.

We're grateful to Jake Tapper for asking some of the right questions.

If time had allowed we'd have liked to see Tapper ask one or two more questions:

It would have been fun to see Drobnic Holan's floundering turn a touch more obvious on national television after a little more questioning.

Conservatives:  Don't trust PolitiFact.  They rated the co-winner of the Lie of the Year for 2013 "Half True" and they'd do the same thing tomorrow.

Liberals:  You should complain that PolitiFact gave half the "Lie of the Year" award for 2013 to a statement PolitiFact rated "Half True" in 2012 and didn't rate again in 2013.

Conservatives and liberals should demand consistency from PolitiFact.  If it doesn't happen, get your fact checks somewhere else.

Here's another line of evidence showing how PolitiFact deliberately misled its readers with this year's "Lie of the Year":

PolitiFact traditionally lists candidates on its reader's poll including the graphics for the ratings ("Related rulings").  But there's no "Half True" among the ratings listed in 2013.  PolitiFact did not want its readers knowing they might be voting for a "Half True" claim made in 2012.  That would be controversial.

Here's how PolitiFact described the process back in 2011 (bold emphasis added):


Later this month, we'll announce PolitiFact's Lie of the Year -- the most significant falsehood of 2011, as chosen by the  editors and reporters on the PolitiFact National staff. We're reviewing claims we've rated False or Pants on Fire and will choose the one that played the biggest role in the national discourse.

One assumes now they're reviewing claims they've rated Half True, Mostly False, False or Pants on Fire.  Though there's no obvious reason to think a "Mostly True" or "True" claim couldn't win it all one day.  Or at least earn a tie.

After PolitiFact publishes its LOTY selection we get the visual "Half True" rating reveal.  At the bottom, third of three after voters were already misled: 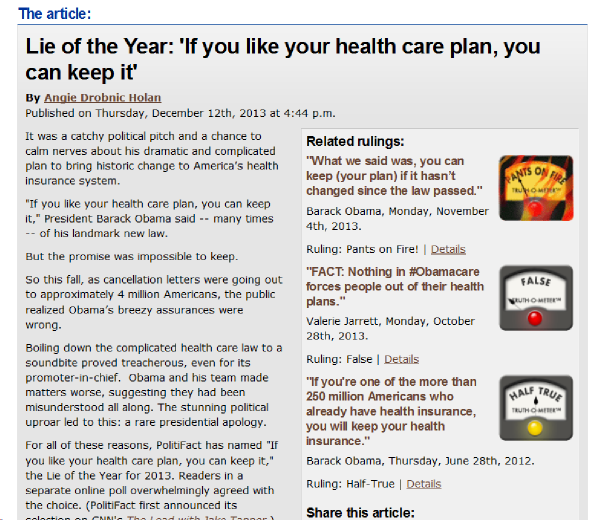 Better late than never?
Posted by Bryan White at 11:28 AM