PolitiFact's Bait and Switch: "If You Like It" is Not a Lie of the Year Finalist

On Monday PolitiFact announced the Lie of the Year nominees for 2013. Twitterers went to work spreading the not-so-shocking news: Obama's claim that "If you like your health care, you can keep it." was a finalist. The lie is pretty obvious by now and the claim certainly fits PolitiFact's criteria for Lie of the Year. So what's the problem?

Let's remind readers that PolitiFact's harshest rating of Obama's most notable deception on ObamaCare is, in fact,  "Half True." As Sean Higgins chronicled over at the Washington Examiner, at least six times PolitiFact has rated some variation of this claim, once even rating a version True.

When millions of American's [Disclosure: Including this writers' minor child] began getting their health insurance cancelled and were offered more expensive, less valuable plans in their place, Obama's promise and PolitiFact's shoddy work were exposed as frauds. Instead of issuing a correction for their obviously flawed rating, PolitiFact decided to stand firmly on both sides of the fence. Their response to the uproar over cancellations was to issue an article on a new specific target; namely, how Obama described his own promise:

How can so many people have been fooled into misrepresenting PolitiFact's Lie of the Year nominees, and incorrectly announcing Obama's "If you like your health care, you can keep it" claim made the cut? Probably because that's exactly what PolitiFact editor Angie Holan told them in the article.  Holan highlighted in bold each of the "Lie of the Year" candidates, except kinda-sorta for one:

If we accept Holan's claim that "If you like your health care, you can keep it." is indeed a Lie of the Year finalist, then she needs to reconcile that with the original Half True rating. Can something that is Half True simultaneously be the "most significant falsehood of the year"?

Holan was the editor on both ratings. It's reasonably assumed she knows what she's writing about. A glance at the "Lie of the Year" announcement shows that all other finalist claims are listed in bold. Only in the "If You Like It" case does Holan choose bold font for a tangentially related claim, and further on identifying the actual finalist. It defies credulity to justify this as a mistake. The implication is that Holan is making an attempt to confuse readers as to which claim is actually being nominated.

The bottom line is PolitiFact included this claim to save face. The "Half True" for "If you like your health care" resulted in an embarrassing exposure of PolitiFact's ineptitude. This is another attempt to make up for it. Don't be fooled. They've stood by the "Half True" rating for years and to this day refuse to acknowledge they are wrong. PolitiFact hasn't changed the rating and they haven't changed their tune.

"If you like your health care, you can keep it." is not a finalist for Lie of the Year. PolitiFact still rates that claim Half True. Don't let them pretend otherwise.

If Holan's deceptive writing was too subtle for you, you're in good company. Check out a Tampa Bay Times editor making the same mistake:

Holan even managed to fool one of PolitiFact's own writers (who also apparently didn't get the memo that he's not allowed to acknowledge we exist): 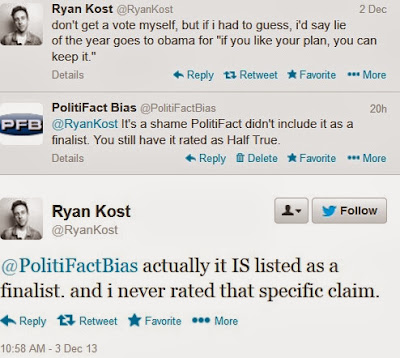 It's worth noting that the voting form uses the same format as PolitiFact's post about its LOTY readers' poll. The wording will strongly encourage readers (like "anonymous" in our comments section below) to believe they have voted for Obama's "you can keep it" promise from previous years.

Note:  I didn't vote in the poll.  I just put a check mark next to it to help make clear the screen capture comes from PolitiFact's ballot page.

It looks like the real fun will start when and if this item wins either the readers' poll or PolitiFact's official award.  Will they say a "Half True" claim from last year won the award?  Or make clear that the winner was Obama's 2013 follow-up fib?  Or simply continue muddling around in the middle?

Update (12/12/13 1859PST): Make sure to read Bryan's follow-up post which gives a more thorough explanation of PolitiFact's deceit: The PolitiFact "Lie of the Year" conspiracy of the year
Posted by Jeff D. at 9:31 AM

Email ThisBlogThis!Share to TwitterShare to FacebookShare to Pinterest
Labels: 2013, Angie Drobnic Holan, If You Like It You Can Keep It, Lie of the Year, Lie of the Year 2013, Ryan Kost