PolitiFact, the fact checker that makes stuff up

What can you say about a fact checker that makes up facts out of whole cloth?

The pictures tell the story (albeit the pictures have words embedded).

A capture of the relevant portion of the McConnell ad: 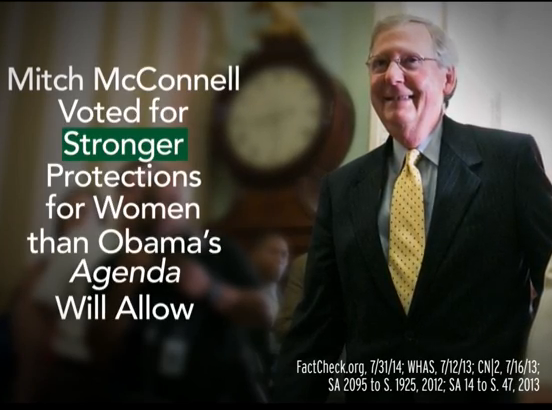 PolitiFact simply invents a straw man argument for Sen. McConnell, suggesting his ad claims the Republican alternative to the Democrats' version of the Violence Against Women Act offered stronger protections for women overall.  But that wasn't the argument in the ad.  The ad simply says "McConnell voted for stronger protections for women than Obama's agenda will allow."  Using that wording allows the ad to refer to select features of the Republican bill that Obama's agenda wouldn't allow.  And PolitiFact confirms it (bold emphasis added):

However, advocates of domestic violence awareness were specifically against the inclusion of these provisions.

So McConnell was right.  Democrats wouldn't support mandatory minimum sentences for certain crimes involving violence against women.  Presumably Democrats opposed longer minimum sentences because allowing people with a history of committing violence against women out of jail sooner presents no threat to women.  Or maybe it gives lawyers more work.

This wasn't just the misleading headline that we so often see in mainstream journalism.  PolitiFact fact-checked the ad as though it was comparing the new VAWA of the Democrats to the Republican alternative.  It's obvious in the fact check's conclusion:


Perhaps McConnell could argue that the mandatory minimum sentences Republicans required in their alternative made for a "stronger" bill, but advocates of domestic abuse awareness opposed this measure as unnecessary.

And the Republican measure was absent several protections for certain groups that were included in the bill Obama signed. McConnell is within his right to oppose those provisions, but it makes it hard for him to prove that he supported "stronger" legislation.

We rate the claim Mostly False.

These fact checkers do not give the facts.  They make them up.
Posted by Bryan White at 12:55 PM

Email ThisBlogThis!Share to TwitterShare to FacebookShare to Pinterest
Labels: 2014, anecdote, Angie Drobnic Holan, Making Facts Out Of Nothing At All, Steve Contorno