The liberal heartache over heartburn

Yesterday some Twitterers complained about our article detailing PolitiFact's failure on a fact check comparing antacid sales to political spending.

Matthew Chapman (@fawfulfan), the ringleader, kicked off the festivities: 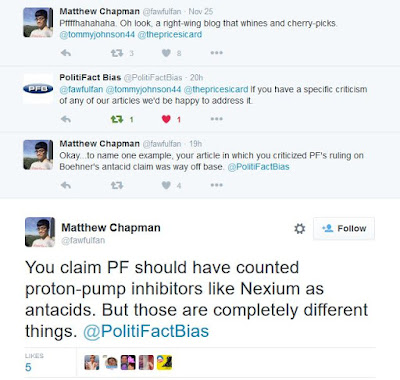 Jeff pointed that out to Chapman. Chapman didn't buy it. 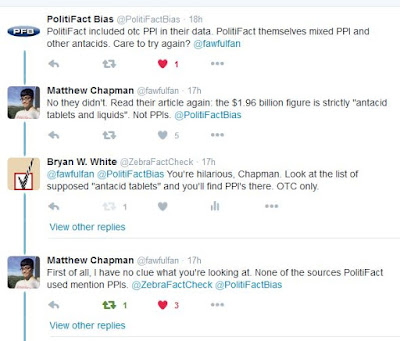 Note that I had joined the fray at his point.

To the record we go.


The problem is, that antacid number was for sales worldwide. In America, the total is about $2 billion. We found that estimate from a couple of sources. The business website Statista.com reported $1.96 billion in sales of antacid tablets in 2013. That excludes liquid antacids.

We found 2011 figures for both tablets and liquid antacids. Liquid antacid sales add about 5 percent more to the total -- $1.6 billion in tablets compared to about $83 million for liquids. Assuming the same trend held in 2013, we’re looking at a total sales figure around $2 billion.

Contrary to Chapman's impression, the URL PolitiFact used in the second quoted paragraph refers explicitly to PPIs. The chart PolitiFact used to estimate antacid sales in 2011 (using figures from 2013!) included PPIs such as Prilosec OTC.

PolitiFact apparently ignored the part of the document referring to "the $2.5 billion antacid market" and added up the numbers from an incomplete chart to derive its sales estimate.

Are we to believe the $1.96 billion figure for antacid tablets from 2013 excludes PPIs while the $2.5 billion figure for tablets and liquids also from 2013 (perhaps a different time frame) includes them? Adding PPIs boosted the market by less than half a billion? That's not plausible. Prilosec OTC by itself accounted for over $350 million in sales. Prilosec is a PPI.

The key to understanding the variation in the numbers is the two definitions of "antacid." We noted that in our original article (bold emphasis added):


Technically speaking, antacids are chemicals one ingests to neutralize excess stomach acid. But the term also serves as a catch-all for medications used to treat heartburn and acid reflux. Proton-pump inhibitors serve as one example.

Were we making up the second definition? Not at all:

1. preventing, neutralizing, or counteracting acidity, as of the stomach.


Undaunted by the truth, Chapman insisted that PPIs are not antacids while trying to excuse PolitiFact's error by claiming that Boehner is wrong "either way." For Chapman, it's not supposed to matter how PolitiFact reaches its conclusion so long as the conclusion is right. But Chapman thinks it makes a big difference how Boehner's office justified his statement:

The source Boehner gave PF to support his point only counts OTC tablet/liquid antacids. Not unreasonable PF would do so too. @PolitiFactBias
— Matthew Chapman (@fawfulfan) November 30, 2015

Boehner's office gave world-wide sales numbers for OTC antacids. Would it be reasonable for PolitiFact to use the world-wide number since Boehner did so? Of course not. Boehner's office likely went fishing for a supporting statistic, found a number that appeared to fill the bill and sent that on to PolitiFact.

The article Boehner's office used does describe the term "antacid" in the narrow sense of chemically neutralizing stomach acid. But that's probably just a mistake by the author. The worldwide sales number from that article likely refers to antacids in the broad sense. Online sources do not appear to track the sales statistics in any way other than using the broad sense. And the $10 billion figure from the article jibes with those other figures.

An added problem for Chapman's argument stems from the fact that PolitiFact did not count only OTC tablet/liquid antacids. There's no evidence in PolitiFact's fact check that it recognized two senses of the term "antacid."

While preparing this update we did find a current estimate for antacid sales (broad sense) in the United States for 2015: $14 billion.

In short, your article uses a way too broad def'n of "antacid" that no doctor would use, and Boehner himself didn't use. @PolitiFactBias
— Matthew Chapman (@fawfulfan) November 30, 2015

No doctor would use the broad sense of "antacid"? Doctors describing the actions of drugs used for treating stomach acid problems would be more likely to use "antacid" in its narrow sense than others. But there's no reason why a doctor can't just as easily use "antacid" in its broader sense, as context demands.

You know I'm right. You just don't have the guts to say it out loud and retract your trainwreck of an article. @ZebraFactCheck
— Matthew Chapman (@fawfulfan) November 30, 2015

We invited Chapman to offer his criticisms in the comments section.

Chapman and his Twitter cohorts were wrong on numerous points, beyond what we document here. They demonstrated no flaw with our article but showed admirable flexibility in ignoring PolitiFact's obvious mistakes.