One of the things that makes PolitiFact's "Truth-O-Meter" so subjective is the lack of any apparent standard for weighting  the literal truth of a claim against its underlying point.

PolitiFact gives us a fresh example with the "Mostly True" rating it bestowed on Democratic presidential nominee Martin O'Malley.

O'Malley said in 1965 the average GM employee could pay for a year's college tuition on just two weeks' wages.

Have a gander at PolitiFact's summary conclusion:


O’Malley said, "Fifty years ago, the average GM employee could pay for a year of a son or daughter’s college tuition on just two weeks [sic] wages."

That’s not quite right -- it would have taken about four weeks of work at GM, not two, to pay for a year at the average four-year college in 1965, and more than that if you take account of taxes. Still, O’Malley has a point that the situation in 1965 was quite a deal compared to today, when a typical auto worker would have to work for 10 weeks in order to pay for a year of tuition at the average four-year college. We rate the statement Mostly True.

Note that PolitiFact cuts O'Malley a break on payroll taxes and he still underestimated the amount of work needed by half with his estimate.

That's like saying the Empire State Building is 800 feet tall but getting a "Mostly True" because, hey, the underlying point is that it's a tall building.

With PolitiMath we're looking for correlations between numerical errors and PolitiFact's ratings.

This O'Malley case caught our eye right away: 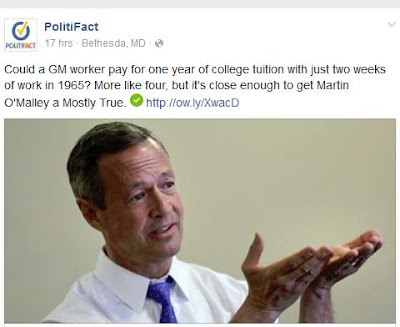 The story summary makes clear right away that O'Malley was way off with his figure. Despite that, he received the "Mostly True" rating.

What was O'Malley's percentage error?

Using PolitiFact's figures for tuition at a 4-year college ($607) and giving O'Malley a pass on payroll taxes ($297.60), O'Malley underestimated the cost in 1965 by 51 percent. He cut it in half and received a "Mostly True" rating.

We're not aware of any other percentage error of this magnitude receiving a rating of "Mostly True" from PolitiFact. This might be the record.
Posted by Bryan White at 11:14 AM