Earlier this week we published our 2015 update to our study of PolitiFact's bias in applying its "Pants on Fire" rating.

In 2015 the states provided comparatively little data. State franchises, with a few exceptions, seem to have a tough time giving false ratings. The state PolitiFact operations also tend to vary widely in the measurement of the "Pants on Fire" bias. PolitiFact Wisconsin's "Pants on Fire" ratings proportionally treat Democrats more harshly than Republicans, for example. 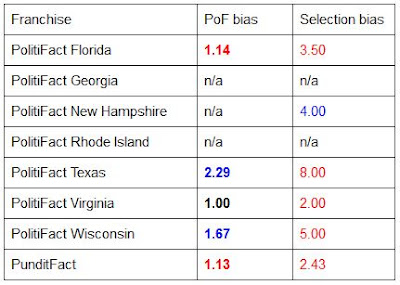 PolitiFact Florida: PolitiFact Florida's data roughly matched those from PolitiFact National and PunditFact. Those three franchises are the most closely associated with one another since all are based in Florida and tend to share writing and editorial staff. In 2015 the PoF bias number was within a range of five hundredths for each. That's so close that it's suspicious on its face. All three gave Republicans more false ratings than Democrats (4.83, 3.50, 2.43).

PolitiFact Virginia: PF Virginia achieved perfect neutrality in terms of our PoF bias number. That's the meaning of a 1.00 score. The "Pants on Fire" claims as a percentage of all false claims was equal for Republicans and Democrats.

PolitiFact Wisconsin: PF Wisconsin continued its trend of giving Democrats the short end of the PoF bias measure. That's despite giving Republicans a bigger share than usual of the total false ratings. The 5.00 selection bias number was easily the all-time high for PF Wisconsin, besting the old mark of 1.57 back in 2011.

PunditFact: PunditFact, we should note, produces data we class in our "Group B." PunditFact tends not to rate partisan candidates, officeholders, partisan appointees or party organizations. It focuses more on pundits, as the name implies. We consider group B data less reliable as a measure of partisan bias than the group A data. But we do find it interesting that PunditFact's data profile lines up pretty closely with the most closely associated PolitiFact entities, as noted above. That finding proves consistent with the idea that PolitiFact ratings say something about the viewpoint of the ones giving the ratings.
Posted by Bryan White at 12:41 PM