The liberal bloggers/mainstream fact checkers at PolitiFact are expanding their "fake news" police mission at Facebook. While they're at it, they're publishing misleading reports.

Remember the pushback when Facebook announced that fact checkers would help it flag "fake news?" PolitiFact Editor Angie Drobnic Holan made the rounds to offer reassurance:


[STELTER:]Angie, there has been a lot of blowback already to this Facebook experiment. Some on the right are very skeptical, even mocking this. Why is it a worthwhile idea? Why are you helping Facebook try to fact-check these fake stories?

HOLAN: Go to Facebook, and they are going about their day looking to connect with friends and family. And then they see these headlines that are super dramatic and they wonder if they're right or not. And when they're wrong, sometimes they are really wrong. They're entirely made up.

It is not trying to censor anything. It is just trying to flag these reports that are fabricated out of thin air.

Welcome to PolitiFact's version of Facebook mission creep. Sarah Palin posted a meme criticizing the Paris climate accord. The meme showed a picture of Florida legislators celebrating, communicating the attitude of those who support the Paris climate agreement: 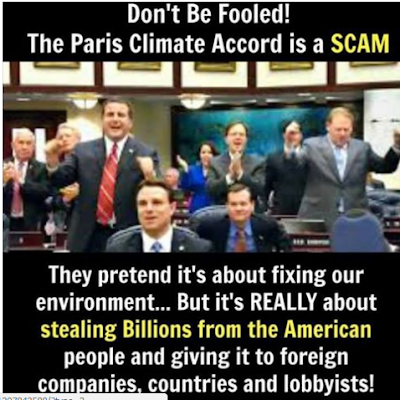 The meme does not try to capture the appearance of a regular news story. It is primarily offering commentary, not communicating the idea that Florida legislators supported the Paris climate agreement. As such, it simply does not fit the definition of "fake news" that PolitiFact has insisted would guide the policing effort on Facebook.

Yet PolitiFact posted this in its fact check of Palin:


PolitiFact fact-checked Palin’s photo as part of our effort to debunk fake news on Facebook.

Fail. It's as though PolitiFact expects meme-makers to subscribe to the same sets of principles for using images that bind professional journalists (oops): 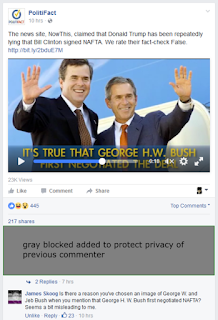 Maybe PolitiFact should flag itself as "fake news"?

Over and over we point out that PolitiFact uses the same varieties of deception that politicians use to sway voters. This fact check of Palin gives us yet another outstanding example.  What did Palin do wrong, in PolitiFact's eyes?

PolitiFact provided no good evidence Palin said any such thing. The truth is that Palin posted an Internet meme (we don't know who created it) that used an image that did not match the story.

PolitiFact has posted images that do not match its reporting. We provided an example above, from a PolitiFact video about President Clinton's role in signing the North American Free Trade Agreement.

If we reported "PolitiFact said George W. and Jeb Bush Negotiated NAFTA," we would be giving a misleading report at best. At worst we'd be flatly lying. We apply the same standard to PolitiFact that we would apply to ourselves.

We sent a message to the writer and editor at PolitiFact Florida responsible for this fact check. We sent it before starting on the text of our post, but we're not waiting for a response from PolitiFact because PolitiFact usually fails to respond to substantive criticism. If we receive any substantive reply from PolitiFact, we will append it to this message and amend the title of the post to reflect the presence of an update (no, we won't hold our breath).

Your fact check of Sarah Palin's Paris climate accord meme is disgraceful for two big reasons.

First, you describe the fact check as part of the Facebook effort to combat "fake news." After laboring to insist to everyone that "fake news" is an intentionally false news item intended to mislead people, it looks like you've moved toward Donald Trump's definition of "fake news." The use of a photograph that does not match the story is bad and unethical practice in professional journalism. But it's pretty common in the production of political memes. Do you really want to expand your definition of "fake news" like that, after trying to reassure people that the Facebook initiative was not about limiting political expression? Would you want your PolitiFact video identifying George W. Bush/Jeb Bush as George H. W. Bush classified as "fake news" based on your use of an unrelated photograph?

Second, your fact check flatly states that Palin identified the Florida lawmakers as celebrants of the Paris climate accord. But that obviously is not the case. The fact check notes, in fact, that the post does not identify the people in the photo. All the meme does is make it easy to jump to the conclusion that the people in the photo were celebrating the Paris agreement. As such, it's a loose implication. But your fact check states the misdirection is explicit:


Palin posted a viral image that purportedly shows a group of people clapping as a result of the Paris agreement, presumably about the billions they will earn.

Purported by whom? It's implied, not stated.

Do you seriously think the purpose of the post was to convey to the audience that Florida legislators were either responsible for the Paris agreement or celebrating it? That would truly be fake news as PolitiFact has tried to define it. But that's not what this meme does, is it?

You're telling the type of half-truth you claim to expose.