In part one of "PolitiLies at PolitiFact Wisconsin," we shared our experience questioning PolitiFact's reporting from a fact check of U.S. Rep. Glenn Grothman (R-Wis.).

In part two, we will look at PolitiFact Wisconsin's response to having a clear error pointed out in one of its stories.

On May 11, 2017, PolitiFact Wisconsin published a "Pants on Fire" rating of U.S. Rep. Paul Ryan's claim that "Air Force pilots were going to museums to find spare parts over the last eight years."

PolitiFact issued the "Pants on Fire" ruling despite a Fox News report which featured an Air Force captain, identified by name, who said the Air Force had on seven occasions obtained parts for B-1 bombers from museums.

PolitiFact Wisconsin objected to the thin evidence, apparently including the failure of the report to identify any of the museums that allegedly served as parts repositories (bold emphasis added):


The only example Ryan’s office cited was a May 2016 Fox News article in which an Air Force captain said spare parts needed for a B-1 bomber at a base in South Dakota were taken from seven "museum aircraft" from around the country. The museums weren’t identified and no other details were provided.

The accompanying video showed a B-1 bomber situated next to the name of the museum: South Dakota Air and Space Museum. 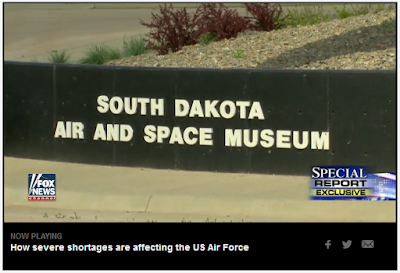 "Readers who see an error should contact the writer or editor"

In this case, we contacted writer Tom Kertscher and editor Greg Borowski (May 31, 2017):


Dear Tom Kertscher, Greg Borowski,
Your rating of Speaker Ryan's claim about the Air Force pulling parts from museum planes falsely claims that none of the seven museums were identified.

Yet the Fox News report said the Air Force officer showed reporters the museum plane from which a part was taken. And if you bothered to watch the video associated with the story, the name of the museum appears very plainly in front of the B-1 bomber the officer identified.

And if the names of the museums was a point worth mentioning, then why not contact the officer (identified by name in the Fox News report) and ask him? If he identified one of the museums, would he not identify the others?

After nearly a week, we have received no reply to our message and the PolitiFact Wisconsin fact check still features the same false information about the Fox News report.


Update June 10, 2017: On June 2017 we received a message from PolitiFact Wisconsin editor Greg Borowski. Borowski said he had not received our email message (we do not know if writer Tom Kertscher, to whom it was also sent, had the same experience). Borowski said after finding out about the criticism PolitiFact Wisconsin "added a note to the item."

This editor's note was added at the end of the fact check:


Editor's note: This item was updated on June 9, 2017 to say that the Fox News report did identify one museum. That information does not change the rating.

As with the other correction we helped prompt this week, we are impressed by PolitiFact Wisconsin's ability to commit an error and then fix the error without admitting any mistake. The editor's note says the fact check was changed "to say the Fox News report did identify one museum." Why was that change made? The editor's note doesn't say. The truth is the change was made because PolitiFact Wisconsin made a mistake.

It's appropriate for journalists to admit to making mistakes when they make them.  We do not care for the spin we see in PolitiFact Wisconsin's update notices.

Are we being too tough on PolitiFact Wisconsin? We think noted journalist Craig Silverman would agree with us.


Rather than destroying trust, corrections are a powerful tool to reinforce how accountable and transparent we are.

“If you’re willing to admit you’re wrong, people will trust you more,” said Mathew Ingram of Gigaom. “If I said to someone ‘You know, I’m never wrong’ they would think I was a psychopath or a liar, so they would trust me less. That’s versus if I said ‘I screw up all the time.’ They trust you more because you’re more human.”

That’s the paradox of trust: admitting our mistakes and failings make us more deserving of trust.

Correction June 14, 2017: Commenter Vinni BoD noticed our update was dated Sept. 2017. The month was actually June, which was the correct month in two spots where we (inexplicably) had "Sept." instead.
Posted by Bryan White at 9:00 AM