A non sequitur occurs when one idea does not follow from another. 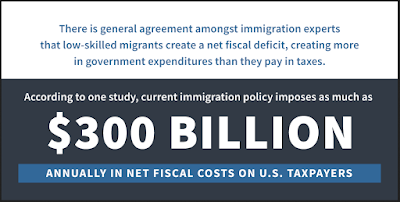 As for what the White House actually claimed, yes the Washington Times reported there was one study--a thorough one--that said current immigration policy costs U.S. taxpayers as much as $296 billion annually.

We do not know the precise origin of that figure after looking for it in the study. Apparently PolitiFact also failed to find it and after mentioning the Times' report proceeded to use the study's figure of $279 billion for 2013. That figure was for the first of eight scenarios.

Was the $296 billion number an inflation adjustment? A population increase adjustment? A mistake? A figure representing one of the other groups? We don't know. But if the correct figure is $279 billion, $300 billion represents a liberal-but-common method of rounding. It could also qualify as an exaggeration of 8 percent.

What problem does PolitiFact find with the infographic (bold emphasis added)?


A consultant who contributed to the report told us that in 2013 the total fiscal burden -- average outlays minus average receipts multipled [sic] by 55.5 million individuals -- was $279 billion for the first generation of immigrants. But making a conclusion on that one figure is a mighty case of cherry-picking.

What conclusion did the infographic draw that represents cherry picking?

That line from Valverde does not belong in a fact check without a clear example of the faulty cherry picking. And in this case there isn't anything. The fact check provides more information about the report, including some positives regarding immigrant populations (especially second-generation immigrants), but ultimately finds no concrete fault with the infographic.

The White House claimed that "current immigration policy imposes as much as $300 billion annually in net fiscal costs on U.S. taxpayers."

A study from the National Academies of Sciences, Engineering, and Medicine analyzed the fiscal impact of immigration under different scenarios. Under some assumptions, the fiscal burden was $279 billion, but $43 billion in other scenarios.

The report also found that U.S.-born children with at least one foreign-born parent are among the strongest economic and fiscal contributors, thanks in part to the spending by local governments on their education.

The statement is partially accurate but leaves out important details. We rate it Half True.

In the second paragraph PolitiFact says the fiscal burden amounted to $43 billion "in other scenarios." Put correctly, one scenario put the figure at $279 billion and two scenarios may have put the figure at $43 billion because the scenarios were nearly identical. The study looked at a total of eight scenarios, found here. It appears to us that scenario four may serve as the source of the $296 billion figure reported in the Washington Times.

Our conclusion? PolitiFact's fact check provides a left-leaning picture of the context of the Trump White House infographic. The infographic is accurate. It plainly states that it is picking out a high-end figure. It states it relies on one study for the figure.

The infographic, in short, provides readers alerts to the potential problems with the figure it uses.

That said, the $300 billion figure serves as a pretty good example of appealing to the audience's anchoring bias. Mentioning "$300 billion" predisposes the audience toward believing a similarly high figure regardless of other evidences. That's a legitimate gripe about the infographic, though one PolitiFact neglected to point out while fabricating its charge of "cherry-picking."

*I noticed ages ago that the Obama administration produced a huge number of misleading infographics. Maybe PolitiFact fact checked one of them?

Correction Jan. 31, 2018: Inserted the needed word "check" between "fact" and "provides" in the fourth paragraph from the end.