We say PolitiFact leans left and stinks at fact-checking.

We support our point with examples.

We admit at the outset that if House Minority Leader Nancy Pelosi's statement is true and leaves out nothing significant then it follows that our example does not show that PolitiFact leans left and stinks at fact-checking.

And we assert that our argument will permit no reasonable person to believe that Pelosi left out nothing of significance.

The key to PolitiFact's fact check comes straight from the Congressional Budget Office:


Why does CHIP save the government money? In short, it’s because the alternatives cost more.

According to CBO, "extending funding for CHIP for 10 years yields net savings to the federal government because the federal costs of the alternatives to providing coverage through CHIP (primarily Medicaid, subsidized coverage in the marketplaces, and employment-based insurance) are larger than the costs of providing coverage through CHIP during that period."

PolitiFact has CBO on its side. Game over? PolitiFact wins?

On one hand, CBO says "federal costs" of CHIP alternatives come out higher than providing coverage through CHIP.

But CBO's explanatory chart tells a different story. It says that costs for CHIP alternatives through Medicaid and subsidized individual market coverage go down by $72.4 billion (red ovals). Over the same 10-year period, CHIP costs go up by $78.9 billion (black oval).

On the expense side, CHIP reauthorization increases costs by $6.9 billion. 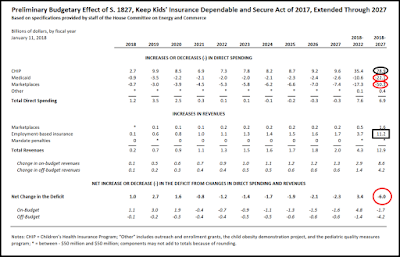 The expense side isn't the only side for the CHIP bill.

"Employment-based insurance" accounts for $11.2 billion (black rectangle) in revenue over 10 years. That plus another $1.6 billion from the ACA marketplace brings the total revenue increase from CHIP reauthorization to $12.9 billion. The chart lists $4.6 billion as "off-budget," suggesting to us that the revenue may come from the off-budget Social Security program.

The $11.2 billion in revenue accounts directly for the $6 billion "savings" Pelosi touted (red circle), after accounting for the increased outlays.

Apparently the "savings" do not come from lower expenses at all. The "savings" come from taking $12.9 billion more for CHIP from taxpayers.

And Pelosi's statement told the whole truth with nothing significant left out? We don't buy it.

We think any competent journalist should have noticed this discrepancy and addressed it in the fact check.

We're not sure if it accounts for any kind of defense for PolitiFact fact checker Louis Jacobson, but his fact check did not directly cite the very clear CBO chart we used above. Jacobson cited a more complex chart (Table 3, Page 4) showing many billions in lost revenue from the suspension of a handful of ACA taxes such as the medical device tax. Even so, how does a fact-checker miss out on the relevance of CBO's plain identification of increased revenue from CHIP re-authorization?

Zebra Fact Check picks up the ball PolitiFact dropped by asking CBO to explain to the public the origins of CHIP revenue.