When we do not publish for days at a time it does not mean that PolitiFact has cleaned up its act and learned to fly straight.

We simply lack the time to do a thorough job policing PolitiFact's mistakes.

What caught our attention this week? A fact check authored by one of PolitiFact's interns, Lucia Geng.

We were curious about this fact check thanks to PolitiFact's shifting standards on what counts as a budget cut. In this case the cut itself was straightforward: A lower budget one year compared to the preceding year. In that respect the fact check wasn't a problem.

But we found a different problem--also a common one for PolitiFact. At least when PolitiFact is fact-checking Democrats.

The fact check does not question the baseline.

The baseline is simply the level chosen for comparison. The Florida Democratic Party chose to compare the 2011 water management districts' collective budgets with the ones in 2012 and found that they were about $700 million lower. Our readers should note that the FDP started making this claim in 2018, not 2012.

It's just crazy for a fact checker to perform a fact check without looking at other potential baselines. Usually politicians and political groups choose a baseline for a reason. Comparing 2011 to 2012 appears to make sense superficially. The year 2011 represents Republican-turned-Independent Governor Charlie Crist. The year 2012 represents the current governor, also a Republican, Rick Scott.

But what if there's more to it? Any fact checker should look at data covering a longer time period to get an idea of what the claimed cut would actually mean. 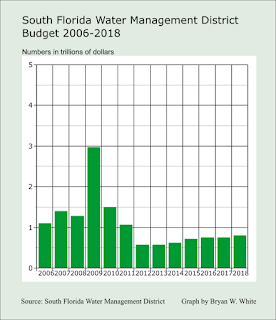 We suspected that 2010 and before might show much lower budget numbers. To our surprise, the budget numbers were far higher, at least for the South Florida Water Management District whose budget dwarfs those of the other districts.

The message here is not that Gov. Crist was some kind of anti-environmental zealot. What we have here is a sign that the water management district budgets are volatile. They can change dramatically from one year to the next. The big question is why, and a secondary question is whether the reason should affect our understanding of the $700 million Gov. Scott cut from the combined water management district budgets between 2011 and 2012.

A fact checker who looked at the volatile changes in spending could then use that knowledge to ask officials at the water management districts questions that would help answer our two questions above. Geng listed email exchanges with officials from each of Florida's water management districts. But the fact check contains no quotations from those officials. It does not even refer to their responses via paraphrase or summary. We don't even know what questions Geng asked.

We did not contact the water management districts. But we looked for a clue regarding the budget volatility in the SFWMD's fiscal year 2011 projections for its future budgets. The agency expected capital expenditures to drop by more than half after 2011.

Rick Scott had not been elected governor at that time (October 2010).

This suggests that the water management districts had a budget cut baked into their long-term program planning, quite possibly strongly influenced by budgeting for the Everglades restoration project (including land purchases). If so, that counts as critical context omitted from the PolitiFact Florida fact check.

We flagged these problems for PolitiFact on Twitter and via email. As usual, the faux-transparent fact checkers responded with a stony silence and made no apparent effort to fix the deficiencies.

Aside from the hole in the story we felt the "Mostly True" rating was very forgiving of the Florida Democratic Party's blatant cherry-picking. And somehow PolitiFact even resisted using the term "cherry-picking" or any close synonym.

We suppose that's not the sort of thing that makes PolitiFact editors wonder "Is that true?"
Posted by Bryan White at 4:30 AM