A funny thing happened when PolitiFact fact-checked a claim about a bias against conservative websites: PolitiFact did not fact check its topic.

No, we're not kidding. Instead of researching whether the claim was true, PolitiFact spent its time undermining the source of the claim. And PolitiFact even used a flatly false claim of its own toward that end (bold emphasis added):


The chart is not neutral evidence supporting Trump’s point, and it labels anything not overtly conservative as "left. In the "left" category are such rigorously mainstream outlets as the Associated Press and Reuters. The three big broadcast networks — ABC, NBC, CBS — are considered "left," as are the Washington Post and the New York Times. Other media outlets that produce a large amount of content every day, including CNN, NPR, Politico, USA Today, and CNBC, are labeled "left."

The statement we highlighted counts as hyperbole at best. On it's face, it simply counts as a false statement exposed as such by the accompanying graphic: 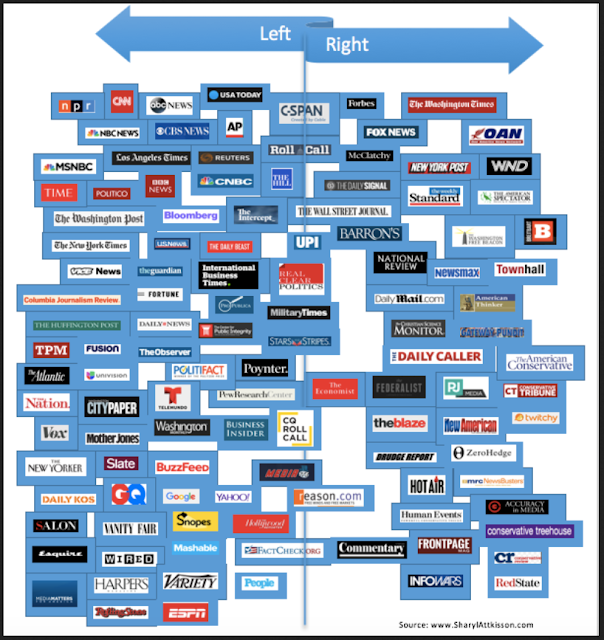 Did PolitiFact even bother to research its own claim? Where are the sources listed? Or did writer Louis Jacobson just happen to have that factoid rattling around in his cranium?

But it's not just Jacobson! The factoid gets two mentions in the fact check (the second one in the summary paragraph) and was okayed by editor Katie Sanders (recently promoted for obvious reasons to managing editor at PolitiFact) and at least two other editors from the PolitiFact "star chamber" that decides the "Truth-O-Meter" rating.

As we have asked before, how can a non-partisan and objective fact checker make such a mistake?

And how does a fact checker properly justify issuing a ruling without bothering to check on the fact of the matter?
Posted by Bryan White at 12:54 PM