In 2011 PolitiFact Bias started a study of the way PolitiFact employs its "Pants on Fire" rating.

We noted that PolitiFact's definitions for "False" and "Pants on Fire" ratings appeared to differ only in that the latter rating represents a "ridiculous" claim. We had trouble imagining how one would objectively measure ridiculousness. PolitiFact's leading lights appeared to state in interviews that the difference in the ratings was subjective. And our own attempt to survey PolitiFact's reasoning turned up nothing akin to an empirically measurable difference.

After Angie Drobnic Holan replaced Bill Adair as PolitiFact editor, we saw a tendency for PolitiFact to give Republicans many more false ("False" plus "Pants on Fire") ratings than Democrats. In 2013, 2015, 2016 and 2017 the percentage was exactly 25 percent each year. Except for 2007, which we count as an anomaly, that percentage marked the record high for Democrats. It appeared likely that Holan was aware of our research and leading PolitiFact toward more careful exercise of its subjective ratings.

Of course, if PolitiFact fixes its approach to the point where the percentages are roughly even, this powerfully shows that the disparities from 2009 through 2014 represent ideological bias. If one fixes a problem it serves to acknowledge there was a problem in need of fixing. 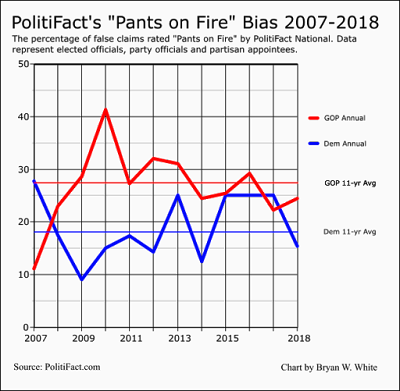 In 2018, however, the "Pants on Fire" bias fell pretty much right in line with PolitiFact's overall history. Republicans in 2018 were about 50 percent more likely to receive a "Pants on Fire" rating for a claim PolitiFact considered false.

Over the years we've had a hard time explaining to people why it doesn't explain away our data to simply claim that Republicans lie more.

That's because of two factors.

Second, our research provides no reason to believe that the "Pants on Fire" rating has empirical justification. PolitiFact could invent a definition for what makes a claim "Pants on Fire" false. PolitiFact might even invent a definition based on some objective measurement. And in that case the "Republicans lie more!" excuse could work. But we have no evidence that PolitiFact's editors are lying when they tell the public that the difference between the two ratings is subjective.

If the difference is subjective, as it appears, then PolitiFact's tendency to more likely give a Republican's false statement a "Pants on Fire" rating counts as a very clear indicator of ideological bias.

To our knowledge, PolitiFact has never addressed this research with public comment.