Not a Lot of Reader Confusion XII

We say that PolitiFact's graphs and charts, including its PunditFact collections of ratings for news networks, routinely mislead readers. But PolitiFact Editor Angie Drobnic Holan says there isn't much reader confusion.


Ho-hum. Another day, another example showing that PolitiFact's charts and graphs mislead its readers.

When Sen. Cory Booker (D-NJ) announced he was running for president, PolitiFact was on the case looking for clicks by publishing one of its misleading graphs of Booker's (subjective) "Truth-O-Meter" ratings.

PolitiFact used a pie chart visual with its Facebook posting: 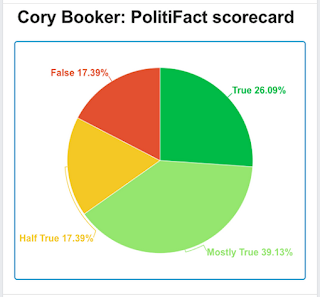 Note the absence of any disclaimer admitting that selection bias affects story selection, along with no mention of the fundamental subjectivity of the "Truth-O-Meter" ratings.

How is this type of graph supposed to help inform PolitiFact's readers? We say it misinforms readers, such as those making these types of comments (actual comments from PolitiFact's Facebook page in response to the Booker posting):


PolitiFact seems to want people to vote for the candidate with the best-looking scorecard. But given that the ratings are subjective and the stories are selected in a non-random manner (nearly guaranteeing selection bias), the "best" scorecard is, in effect, an editorial position based on opinions, not facts.

PolitiFact is selling editorials to its readers with these graphs.

Many in the fact-checking community oppose the use of gimmicky meters (FactCheck.org, Full Fact (UK), for example). If the International Fact-Checking Network and PolitiFact were not both under the auspices of the Poynter Institute then perhaps we'd soon see an end to the cheesy meters.


Correction May 3, 2019: We did XI twice! We updated the second XI to change the title to XII and now we're changing the title of this one to XIII.
Posted by Bryan White at 11:30 AM

Email ThisBlogThis!Share to TwitterShare to FacebookShare to Pinterest
Labels: "There's not a lot of reader confusion out there", Truth-O-Meter