Is the deception one of readers, of self, or of both?

For years we have criticized as misleading PolitiFact's selection-bias contaminated charts and graphs of its "Truth-O-Meter" ratings. Charts and graphs look science-y and authoritative. But when the data set is not representative (selection bias) and the ratings are subjective (PolitiFact admits it), the charts serve no good function other than to mislead the public (if that even counts as a good function).

One of our more recent criticisms (September 2017) poked fun at PolitiFact using the chart it had published for "The View" host Joy Behar. Behar made one claim, PolitiFact rated it false, and her chart make Behar look like she lies 100 percent of the time--which was ironic because Behar had used PolitiFact charts to draw false generalizations about President Trump.

Maybe our post helped prompt the change and maybe it didn't, but PolitiFact has apparently instituted some sort of policy on the minimum number of ratings it takes to qualify for a graphic representation of one's "Truth-O-Meter" ratings.

For PolitiFact Florida, at least, the policy change went into effect in May 2018.

But it's important to know that this policy change is a sham that would hide the central problem with PolitiFact's charts and graphs.

Enlarging the sample size does not eliminate the problem of selection bias. There's essentially one exception to that rule, which occurs in cases where sample encompasses all the data--and in such cases "sample" is a bit of a misnomer in the first place.

What does that mean?

It means that PolitiFact, by acting as though small sample size is a good enough reason to refrain from publishing a chart, is giving its audience the false impression that enlarging the sample size without eliminating the selection bias yields useful graphic representations of its ratings.

If PolitiFact does not realize what it is doing, then those in charge are dangerously ignorant (in terms of improving public discourse and promoting sound reasoning).

If PolitiFact realizes what it is doing wrong and does it regardless, then those in charge are acting unethically.

Readers who can think of any other option (apart from some combination of the ones we identified) are encouraged to offer suggestions in the comments section.


When do the liberal bloggers at PolitiFact think their sample sizes are big enough to allow for a chart?

Tennessee Republican Marsha Blackburn has 10 ratings and a chart. We conclude that PolitiFact thinks 10 ratings warrant a chart (yes, we found a case with 9 ratings and no chart). 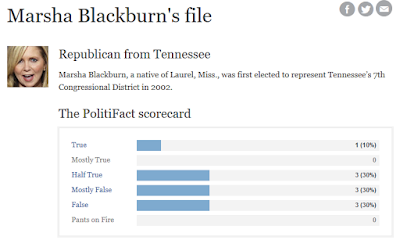