In our post "PolitiFact's Green New Deal Fiction Depiction" we noted how PolitiFact had decided that a Democrat posting a falsehood-laden FAQ about the Green New Deal on her official congressional website escaped receiving a negative rating on PolitiFact's "Truth-O-Meter."

At the time we noted that PolitiFact's forbearance held benefits for Democrats and Republicans alike:


Many will benefit from PolitiFact's apparent plan to give out "Truth-O-Meter" mulligans over claimed aspects of the Green New Deal resolution not actually in the resolution. Critics of those parts of the plan will not have their attacks rated on the Truth-O-Meter. And those responsible for generating the controversy in the first place by publishing FAQs based on something other than the actual resolution also find themselves off the hook.

We were partly right.

Yes, PolitiFact let Democrats who published a false and misleading FAQ about the Green New Deal off the hook.

But apparently PolitiFact has reserved the right to fault Republicans and conservatives who base their criticisms of the Green New Deal on the false and misleading information published by the Democrats.

PolitiFact Florida tweezed out a such a tidbit from an editorial written by Sen. Rick Scott (R-Fla.):

False? It doesn't matter at all that Ocasio-Cortez said otherwise on her official website? There is no truth to it whatsoever? And Ocasio-Cortez gets no "False" rating for making an essentially identical claim on her website?

This case will get our "tweezers or tongs" tag because PolitiFact is once again up to its traditional shenanigan of tweezing out one supposed falsehood from a background of apparent truths:

"If you are not familiar with it, here’s the cliff notes version: It calls for rebuilding or retrofitting every building in America in the next 10 years, eliminating all fossil fuels in 10 years, eliminating nuclear power, and working towards ending air travel (to be replaced with high-speed rail)."

Let’s hit the brakes right there -- do the Democrats want to end air travel?

See what PolitiFact did, there?

Scott can get three out of four points right, but PolitiFact Florida will pick on one point to give Scott a "False" rating and build for him an unflattering graph of  "Truth-O-Meter" ratings shaped by PolitiFact's selection bias.

How does PolitiFact Florida go about discounting the fact that Ocasio-Cortez claimed on her website that the Green New Deal aimed to make air travel obsolete?

The objective and neutral fact checkers give us the Jestation Hypothesis. She must have been kidding.

No, really. Perhaps the idea came directly from one of the three decidedly non-neutral experts PolitiFact cited in its fact check (bold emphasis added):


"It seems to me those lines from the FAQ were lighthearted and ill-considered, and it’s not clear why they were posted," said Sean Hecht, Co-Executive Director, Emmett Institute on Climate Change and the Environment at UCLA law school.

Does anyone need more evidence that the line about making air travel obsolete was just a joke?

Former Clinton White House advisor Bledsoe is about as neutral as Hecht. The supposed "red-herring," we remind readers, was published on Ocasio-Cortez's official House of Representatives website.

The resolution makes no mention of ending air travel. Instead, it calls for "overhauling transportation systems," which includes "investment in high-speed rail." Scott seized on a messaging document from Democrats that mentioned, perhaps in jest, getting rid of "farting cows and airplanes." But we found no evidence that getting rid of airplanes is a serious policy idea from climate advocates.

Apparently it cannot count as evidence that Democrats have advocated getting rid of airplanes if a popular Democratic Party representative publishes this on her website:


The Green New Deal sets a goal to get to net-zero, rather than zero emissions, at the end of this 10-year plan because we aren’t sure that we will be able to fully get rid of, for example, emissions from cows or air travel before then. However, we do believe we can ramp up renewable manufacturing and power production, retrofit every building in America, build the smart grid, overhaul transportation and agriculture, restore our ecosystem, and more to get to net-zero emissions.

Oh! Ha ha ha ha ha! Get it? We may not be able to fully get rid of emissions from cows or air travel in only 10 years! Ha ha ha!

So the claim was quite possibly a joke, even if no real evidence supports that idea.

But it's all PolitiFact needs to give a Republican a "False" rating and the Democrat no rating at all for saying essentially the same thing.

This style of fact-checking undermines fact checkers' credibility with centrists and conservatives, as well as with discerning liberals.

There was one more expert PolitiFact cited apart from the two we showed/noted were blatantly partisan.

Here's a snippet from the home page for NextGen Climate America: 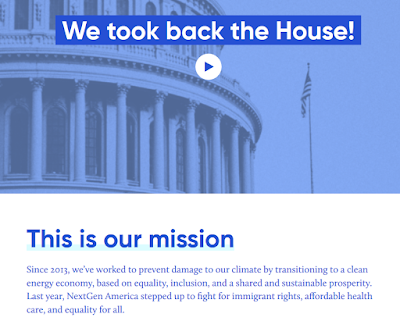