PolitiFact created a classic in the "True but False" genre for Sarah Palin (John McCain's pick for vice presidential nominee) years ago. Palin made a true statement about how U.S. military spending ranks worldwide as a measure of GDP. PolitiFact researched the ways in which that truth misled people and gave Palin a "Mostly False" rating.

On July 29, 2019, PolitiFact gave a great example of the "True but False but True" genre with a fact check of a tweet by Alex Cole (side note: This one goes on the report card for "Tweets" instead of a report card for "Alex Cole"): 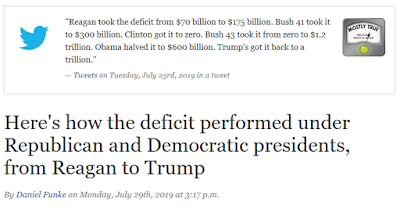 PolitiFact rated Cole's tweet "Mostly True." But the tweet has the same kind of misleading features that led PolitiFact to give Palin a "Mostly False" rating in the example above. PolitiFact docked Palin for daring to compare U.S. defense spending as a percentage of GDP to very small countries as well as those experiencing strife.

But who thinks the deficit at the start and end of an administration serves as a good measure of party fiscal discipline?

Yet that's the argument in Cole's tweet, and it gets a near-total pass from PolitiFact.


And this isn't even one of those situations where PolitiFact focused on the numbers to the exclusion of the underlying argument. PolitiFact amplified Cole's argument by repeating it.


A viral post portrays Democrats, not Republicans, as the party of fiscal responsibility, with numbers about the deficit under recent presidents to make the case.

PolitiFact sends out the false message that the above argument is "Mostly True."

That's ridiculous. For starters, the deficit is best measured as a percentage of GDP. Also, presidents do not have great control over the rise and fall of deficits. PolitiFact pointed out that second factor but without giving it the weight it should have had in undercutting Cole's argument. After all, the tweet suggests the presidents drove deficit changes without any hint of any other explanation.

Yes, this is the same fact-checking operation that laughably assured us back in November 2018 that "PolitiFact is not biased."

PolitiFact could easily have justified giving Cole the same treatment it gave Palin. But it did not. And this type of scenario plays out repeatedly at PolitiFact, with conservatives getting the cold shoulder from PolitiFact's star chamber.

Whether or not the liberal bloggers at PolitiFact are self-aware to the point of seeing their own bias, it comes out in their work.

Hilariously, in this article PolitiFact dinged the deficit tweet for using a figure of $1.2 trillion for the end of the George W. Bush presidency:


"(George W.) Bush 43 took it from 0 to 1.2 trillion." This is in the ballpark. Ignoring the fact that he actually started his presidency with a surplus, Bush left office in 2009 with a federal deficit of roughly $1.41 trillion.

Why is it funny?

The Great Recession hit hard in 2008 and grew worse in 2009. In that period, the unemployment rate doubled from about 5 percent to 10 percent. With Democrats in charge of both houses of Congress and the White House, Washington passed a stimulus package that cost nearly $190 billion, according to the Congressional Budget Office. That included over $100 billion in new spending and a somewhat smaller amount in tax cuts, about $79 billion in fiscal year 2009.

George W. Bush was not in office when those measures passed. So a more accurate number for the deficit he passed on might be closer to $1.2 trillion.

But it's just fact-checking, so inaccuracy is okay so long as it's in the service of a desirable narrative.