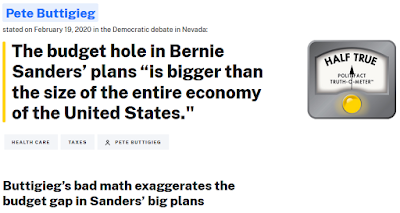 If Buttigieg is guilty of bad anything, it was a poor job of providing thorough context for the measure he used to illustrate the size of Sanders "budget hole." Buttigieg was comparing a cumulative 10-year budget hole with one year of U.S. GDP.

PolitiFact notwithstanding, there's nothing particularly wrong with doing that. Maybe Buttigieg should have provided more context, but there's a counterargument to that point: Buttigieg was on a debate stage with a sharply limited amount of time to make his point. In addition, the debate audience and contestants may be expected to have some familiarity with cost estimates and GDP. In other words, it's likely many or most in the audience knew what Buttigieg was saying.


But there’s an issue with Buttigieg’s basic comparison of Sanders’ proposals to the U.S. economy. He might have been using a rhetorical flourish to give a sense of scale, but his words muddled the math.

The flaw is that he used 10-year cost and revenue estimates for the Sanders plans and stacked them against one year of the nation’s GDP.

PolitiFact tried to justify the "muddled math" charge by noting Buttigieg compared a 10-year cost estimate to a one-year figure for GDP.

PolitiFact goes on to say that the Buttigieg comparison does not compare apples to apples, but so what? Saying an airplane is the size of a football field is also an apples-to-oranges comparison. Airplanes, after all, are not football fields. But the math remains solid: 100 yards equals 100 yards.

If Buttigieg had run a campaign ad using the same words, it would make more sense to grade his claim harshly. Such a message in an ad is likely to reach people without the knowledge base to understand the comparison. But many or most in a debate audience would understand Buttigieg's comparison without additional explanation.

It's an issue of ambiguous context, not "bad math."

Correction Feb. 26, 2018: Omitted the first "i" in "Buttigieg" in the final occurrence in the next-to-last paragraph. Problem corrected.
Posted by Bryan White at 4:30 AM