If PolitiFact's one-sided PolitiSplainer on the Justice Department's reversal on Gen. Michael Flynn's prosecution was not enough, now we have a PolitiSpainer on the Obama administration's unmasking efforts on Flynn and others.

The new PolitiSplainer could win awards for the way it buries the fundamental problem of the unmasking efforts--evidence that knowledge of Russia/Trump collusion falsehood went to the top of the Obama administration and included Vice President Biden--to focus instead on making the unmasking sound like a normal everyday thing at the top of an administration. 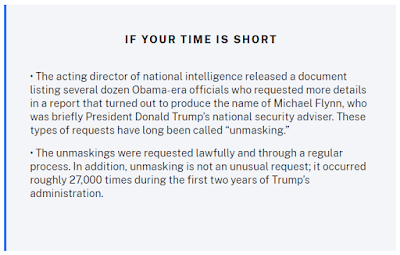 But our favorite PolitiMisfire involves PolitiFact's straw-manning of the Republicans' side of the story.
You don't get a taste of Andy McCarthy's expert analysis. And you don't get Jonathan Turley's view. You don't get a host of stories written by well-known and experienced conservative pundits or experts.

No, we're not making this up.

Does the unmasking list show that top officials "knew" that concerns about Flynn were a "lie"?

Partisans have an easy time jumping to conclusions. And that tendency represents our best guess as to why PolitiFact assumed Obama, Clinton, Strok, Clapper, Rosenstein, FBI, CIA and State all knowing "it" was a lie referred to the Flynn unmasking all by itself.
That's the beauty of picking on a short Facebook post. The "fact checker" (liberal blogger) can see a set of dots and then freely connect them to construct an understanding that fits a preconceived narrative.

There's nothing in Diamond & Silk's Facebook post explaining that the list follows solely from the Flynn unmasking disclosure. PolitiFact invented that and presented it to readers as fact.

PolitiFact can do that, you see, because it does not apply to itself the "Burden of Proof" principle it applies (on occasion) to others.

It's a shameful example of fact-checking. It qualifies as the straw man fallacy, in fact.

It's likely Diamond & Silk were talking about the Trump/Russia collusion narrative being a lie. not "concerns about Flynn."

Fact checkers, if you want the conservative argument about some aspect of executive office procedures try Andrew McCarthy sometime:

This week’s revelations about unmasking are important and intriguing. They should be thoroughly examined. In fact, they are only a snapshot of the unmasking issue — involving just one U.S. person (Flynn) over a period of less than three months. It is highly irregular for government officials on the political side of the national-security realm to seek the unmasking of Americans. It is eye-opening to learn that Vice President Biden and President Obama’s chief-of-staff (McDonough) unmasked the incoming Trump administration’s national security advisor. It is downright scandalous that Samantha Power, Obama’s ambassador to the United Nations, who had little reason to seek unmasking, reportedly requested 260 unmaskings . . . and then told Congress that she did not make the vast majority of requests attributed to her — though it remains unclear, years later, who did make them.

But let’s not miss the forest for the trees. This is not just about unmasking. It is about how pervasively the Obama administration was monitoring the Trump campaign.

PolitiFact's left-leaning fan base was spared any in-depth analysis from the right in favor of PolitiFact's straw man version of Diamond & Silk's Facebook post on the topic. And it got standard talking points from the left (unmasking is so totally normal!).
That kind of fact-checking qualifies as a disservice to readers who are interested in the truth.
Update May 17, 2020: clarified language in the second paragraph
Posted by Bryan White at 1:30 AM