We almost titled this post "PolitiFact's Michael Flynn case PolitiSplainerainerainerainer" in honor of way PolitiFact reinforces the liberal echo chamber effect surrounding the Michael Flynn prosecution and reversal.
This week the Justice Department filed a motion declaring it would no longer prosecute the case against Flynn, citing recent document releases that drew into serious question the materiality of the statements over which Flynn was prosecuted. The Washington Post published a piece in 2018 by Phillip Bump that helps explain the importance of materiality:

Clearly, telling an FBI agent something untrue during an interview at FBI headquarters as you face criminal charges subjects you to charges of making false statements. Equally clearly, if an FBI agent friend of yours asks to borrow a dollar and you lie and say you don’t have any cash, that’s not going to get you taken away in handcuffs. But where is the line drawn between the two?

The Justice Department's filing says it believed it could no longer prove beyond a reasonable doubt that Flynn communicated a material falsehood to the FBI. The main key to that reversal stemmed from the disclosure that the FBI had an investigation specific to Flynn ("Crossfire Razor") and that the FBI had recommended closing that investigation for lack of evidence before deciding to interview Flynn.
Adding insult to injury, prosecutors never revealed that exculpatory evidence during trial or via disclosure to the defense. That failure deprived Flynn of a valuable tool that might have aided his defense.

In what we would take as an astonishing move if PolitiFact was an objective and impartial fact checker, its PolitiSplainer explains none of that.
Here's the whole of the case for Flynn, by PolitiFact's telling:

After Attorney General William Barr asked Jeff Jensen, the U.S. attorney in St. Louis, to review the case, Jensen concluded that a dismissal of the case was warranted. Barr agreed.

In its filing, the Justice Department argued that the FBI had no basis to continue investigating Flynn after failing to find illegal acts. Flynn’s answers during the interview were equivocal, not false, and weren’t relevant to the investigation, the department said.

"A crime cannot be established here," the attorney general told CBS, saying "people sometimes plead to things that turn out not to be crimes."

Sure, PolitiFact reports the Department said Flynn's answers "weren't relevant to the investigation" but it does not explain that answer in terms of the law.

None of the experts PolitiFact quoted for the story had anything to say about it, either. Only two of the four had records of giving to Democrats this time (Barbara McQuade, James Robenalt). Open Secrets had no record of political giving from the other two.

PolitiFact also curiously failed to either link to or quote from the DOJ filing in the Flynn case. We wonder if anyone from PolitiFact bothered to read it. 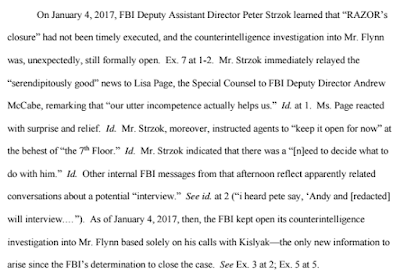 FBI executives decided to keep open an investigation into whether Flynn was a Russian asset based on a conversation that was innocuous save for its interpretation as a violation of the (virtually ignored) Logan Act.

It's as though PolitiFact's PolitiSplainer was designed to keep people in the dark, or at least support a rapidly eroding media narrative.
Update/Correction May 12, 2020: PolitiFact Bias asserted that PolitiFact failed to quote from the DOJ filing. We fixed that with a pair of strikethroughs. PolitiFact used a pair of very short snippets near the beginning of its PolitiSplainer (bold emphasis added):

The filing said that a key interview of Flynn did not have "a legitimate investigative basis" and therefore the department does not consider Flynn’s statements from the interview to be "material even if untrue."

We still say PolitiFact's 'Splainer fails to explain the legal importance of materiality. If Flynn's alleged falsehoods were not relevant (material) to the active investigation then they were not illegal.

We also note that this part of PolitiFact's article undercuts the "expert" testimony discussed in our critique. If only "a key interview of Flynn" did not have the legitimate investigative basis then what of the other parts of the Flynn investigation? PolitiFact's Louis Jacobson should have noticed the discrepancy.
Posted by Bryan White at 1:00 PM