Though PolitiFact Bias finds PolitiFact biased to the left, we also find that PolitiFact simply stinks at fact-checking. PolitiFact stinketh so much that its mistakes sometimes run against its biased tendencies to unfairly harm Democrats or unfairly help Republicans.

We ran across a clear case of the latter this week while putting together a spreadsheet collection of PolitiFact's "True" ratings. Sen. Marco Rubio (R-Fla.) received a "True" for a significantly flawed claim about Social Security:

Rubio was right that Social Security had to draw down the Trust Fund balance to pay benefits. But PolitiFact simply didn't bother to look at whether it was happening "for the first time."

It wasn't happening for the first time. It happened often during the 1970s. And in the 1970s Social Security was on-budget. That means that when people claim that Social Security has never contributed to the federal deficit they are quite clearly wrong as a matter of fact.

PolitiFact only looked at one government source in fact-checking Rubio. That source had nothing about whether the Trust Fund drawdown was happening for the first time.

A chart from the Committee for a Responsible Federal Budget makes the shortfall from the 1970s clear: 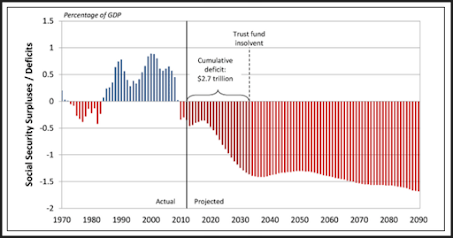 It's unlikely PolitiFact was trying to do Rubio a favor. Rather, the staff at PolitiFact probably thought they knew Social Security's financial history was solid and simply did not question when Rubio affirmed that expectation.

We'll attach the "Left Jab" tag to this item even though it did not come from a left-leaning critic of PolitiFact.