A handful of baloney from PolitiFact

"At PolitiFact, we wrote "Principles of the Truth-O-Meter" to help guide our work. Words matter was the first principle."

"PolitiFact, thy name is Hypocrisy."

What is a "handful"?

PolitiFact does the Youngkin handful

"Vaxxed and Relaxed" (@PorterPints) on March 1, 2022 highlighted a PolitiFact fact check of a "handful" claim made by Gov. Glenn Youngkin (R-Va.). Youngkin said Virginia is one of "a handful" of states that taxes veterans' retirement benefits.

In the text of the fact check, PolitiFact informs us that 12 out of 50 states is certainly more than a handful:

Virginia is one of three states that fully tax military pensions. Twelve more states tax the pensions at reduced rates, which is what Youngkin wants to do in Virginia.

We rate Youngkin's claim Half True.

So, thanks to PolitiFact we know that the upper boundary for a "handful" is 12 or less, or perhaps 24% or less of a total if we use percentages.

PolitiFact does the Summers handful

Not long after "Vaxxed and Relaxxed" tweeted about the Youngkin "handful," we found another PolitiFact fact check of a "handful" claim, with this claim coming from Democrat Paul Summers. 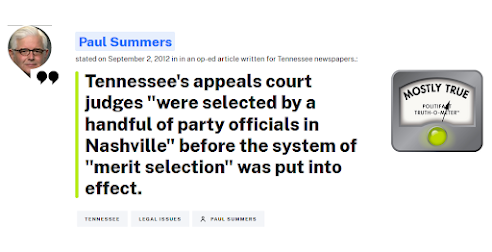 In this fact check, PolitiFact taught us that 34 out of 66, or perhaps a 51 percent majority, clearly falls below the upper boundary for a "handful" (bold emphasis added):

Early in that year, two of the five incumbent Supreme Court justices stepped aside, reportedly after failing to gather enough political support among party activists on the Democratic Executive Committee. The Democratic nominees wound up being the only candidates on the ballot and were elected to full eight-year terms.

That was clearly a case where, as Summers states, a majority of the committee – 34 of the 66 members, or a "handful of party officials" if you will – was able to choose Supreme Court justices.

In short, PolitiFact hilariously contradicted itself regarding the matter of the word "handful."

But just out of idle curiosity, what does the dictionary say? 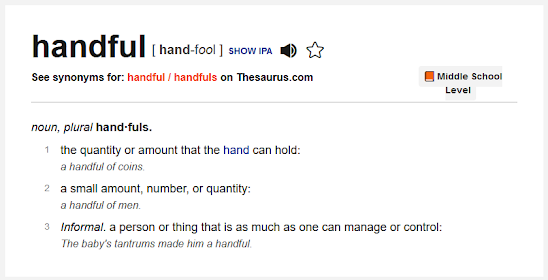 Moral of the story

It's folly for a fact checker to try to place definite numerical boundaries around indefinite terms. Claims that include such terms serve as poor fact check fodder.

We note that Matt Palumbo somewhat pre-empted us on this story with a March 2, 2022 item. We will publish our version anyway, as the research locating the Simpson "handful" fact check was original with us. We're entitled to publish on the website the same comparison we made on Twitter on March 1, 2022.