As we noted in our post about the "Pants on Fire" research for 2020, we have changed the way we do the research.

PolitiFact revamped its website in 2020, and the update made it next to impossible to reliably identify which of PolitiFact's various franchises were responsible for a fact check. Instead of focusing on PolitiFact National, it makes more sense to lump all of PolitiFact together. But the new approach has a drawback. The new evaluations represent an apples-to-oranges comparison to the old evaluations.

To deal with that problem, we went back and did PolitiFact's entire history since 2007 using the new method.

With the research updated using the new method, we are now able to compare the new research with the old method.

Spoiler: Using the new method, PolitiFact was 2.66 times more likely to rule a claim it viewed as false as "Pants on Fire" from a Republican than for a Democrat. That's PolitiFact's third-highest bias figure of all time, though PolitiFact National, considered separately, has exceeded that figure at least three times. 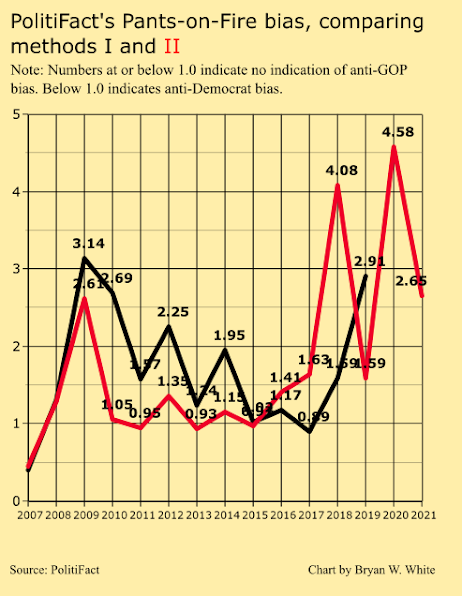 The numbers represent the what we term the "PoF bias number," which is an expression of how much more likely it is that PolitiFact will a claim it regards as false a "Pants on Fire" rating for a Republican over a Democrat. So, for 2009 under the old method (black line), the GOP was 3.14 times more likely to have one of its supposedly false statements rated "Pants on Fire."

As our research has documented, PolitiFact has never offered an objective means of determining the ridiculousness of a claim viewed as false. The "Pants on Fire" rating, to all appearance, has to qualify as a subjective judgment. In other words, the rating represents PolitiFact's opinion.

In 2017, under the old method, the bias number dropped to 0.89, showing a bias against Democrats for that year at PolitiFact National. On average over time, of course, Republicans were significantly more likely to have their false claims regarded as "ridiculous" by PolitiFact.

Notably, the new method (red line) shows a moderating effect on PolitiFact's "Pants on Fire" bias from 2008 through 2014. The red line hovers near 1.00 for much of that stretch. After 2015 the red line tends to run higher than the black line, with the notable exception of 2019.

We found two correlations that might help explain the patterns we see in the graphs.

PolitiFact changes over time. From 2007 through 2009, PolitiFact National did nearly every rating. Accordingly, the red and black lines track very closely for those years. But in 2010 PolitiFact added several franchises in addition to PolitiFact Florida. Those franchises served to moderate the PoF bias number until 2015, where we measured hardly any bias at all in the application of PolitiFact's harshest rating.

After 2015, a number of franchises cut way back on their contributions to the PolitiFact "database" and a number ceased operations altogether, such as PolitiFact New Jersey and PolitiFact Tennessee. And in 2016 PolitiFact added eight new state franchises (in alphabetical order): Arizona, Colorado, Illinois, Nevada, New York, North Carolina, Vermont and West Virginia.

We made graphs to help illustrate the franchise shift. PolitiFact has had over 20 franchises over its history, so we'll divide the graph into two time segments to aid the visualization.

Note that the contributions are skinny, except for the one from Wisconsin. But even Wisconsin cut its output compared to the previous graph. We have a correlation suggesting that the participation of different state franchises impacted the bias measure.

But there's another correlation.

Liberals like to explain PolitiFact ratings that look bad for Republicans by saying that Republicans lie more. Seriously, they do that. But we found that spikes--especially recent ones--in the "Pants on Fire" bias measure were influenced by PolitiFact's spiking reluctance to give Democrats a "Pants on Fire" rating.

That correlation popped out when we created a graph showing the percentage of false statement given the "Pants on Fire" rating by party. The graph for Republicans stays pretty steady between 20 and 30 percent. The graph for Democrats fluctuates wildly, and the recent spikes in the bias measure correlate with very low percentages of "Pants on Fire" ratings for Democrats. 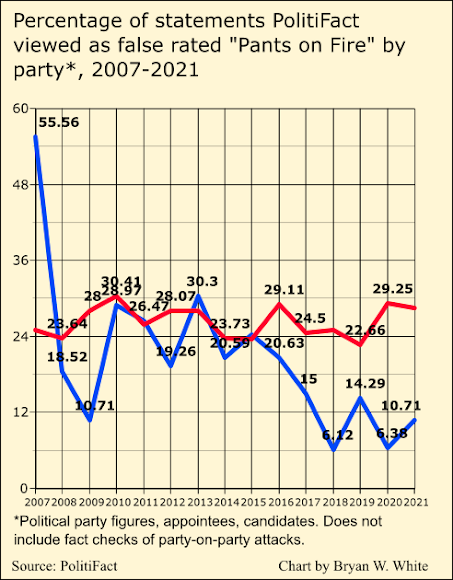 Notes on the PolitiFact franchise numbers: As we noted from the outset, PolitiFact's revamped website made it all but impossible to identify which franchise was responsible for which fact check. So how did we get our numbers?

We mostly ignored tags such as "Texas" or "Wisconsin" and looked for the names of staffers connected to the partnered newsroom. This was a fallible method because the new-look website departs from PolitiFact's old practice of listing any staffers who helped write or research an article. The new site only lists the first one mentioned from the old lists. And it has long been the case that staffers from PolitiFact National would publish fact checks under franchise banners. So our franchise fact check numbers are best taken as estimates.