Our review of this case will look at the major errors first, but this post will go in-depth on the evidence because this case looks very bad for PolitiFact. The facts demand we consider the possibility that PolitiFact Missouri chose and executed this fact check to deliberately favor Democratic gubernatorial hopeful Chris Koster.

The Gender Pay Gap in Missouri

PolitiFact Missouri's fact check focuses on a claim made on Twitter:

Koster tweeted, "The #WageGap isn’t about isn’t about [sic] a few cents — it can mean EVERYTHING to a working woman trying to provide for her family."

His tweet contained a photo with a captain [sic] that stated, "Closing our state’s wage gap would make a $9 billion difference to Missouri women."

Democratic politicians often blur the line between the raw gender pay gap and a gap caused by gender discrimination in the workplace.

The raw gender pay gap in this case represents the difference in pay between men and women regardless of the job and without accounting for differences in hours worked by full-time employees.

The unexplained gender pay gap is the difference in pay between men and women after explaining part of the gap. The unexplained gap varies depending on what the researchers try to explain, so measurement of that gap may vary. 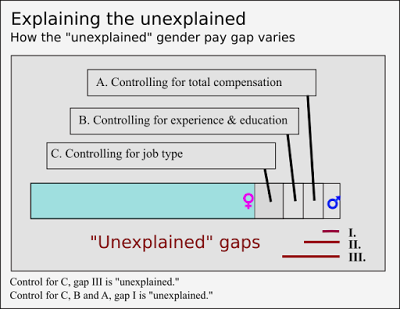 Some portion of the unexplained gap is perhaps explained by gender discrimination. But the research does not pin down that percentage. Studies that consider more potential explanations tend to show smaller unexplained gaps.


A study from the Institute for the Study of Labor, an economic research institute based in Bonn, Germany, shows the unexplained wage gap in the United States falls somewhere between 8 percent and 18 percent of the total earnings difference, if the figures are adjusted for additional factors.Using the high-end estimate, the $9.5 billion figure falls to about $7.5 billion.

However, we did not do a good enough job verifying that PolitiFact's description of the report was correct. The report estimates an unexplained gender pay gap between 8 and 18 percent [see embedded Update for clarification] for 2014 2010. So 18 percent represents the total unexplained earnings difference the researchers estimated, not a percentage of the raw gender wage gap. PolitiFact Missouri described the report's results poorly.  PolitiFact Missouri also relied on a study that skimped on gap explanations compared to other studies found through its source list.

Using its preferred study, PolitiFact calculated as much as $7.5 billion of the raw $9.5 billion gap may represent gender discrimination. The math is right. But is PolitiFact Missouri justified in using the 18 percent figure for its calculation?

After the page break, we'll describe the findings of the reports PolitiFact Missouri cited but ignored for purposes of its math equations. Beyond that, we'll note how PolitiFact passed up an easier fact check of Koster--one with a cut-and-dried poor result for Koster. That other fact check was also from Koster's Twitter feed, so we see no obvious reason why PolitiFact Missouri would have missed it.


Put simply, PolitiFact Missouri did not pay attention to two out of three of its sources if a $7.5 billion share of $9.5 billion seemed reasonably caused, at least potentially, by gender discrimination.


The 23-cent gap has been challenged by economists and policy groups who say the gap is much smaller when factors such as education, type of job and experience level are considered.

PolitiFact cited a paper from the Federal Reserve Bank of St. Louis, titled "Gender Wage Gap May Be Much Smaller Than Most Think."

Again, we think "much smaller" should start red flags waving for the average journalist over the $7.5 billion figure. That goes double when the phrase occurs twice from the source list.

Moreover, the report told of two estimates for the unexplained wage gap much lower than the 18 percent gap PolitiFact Missouri used in its fact check. Here the report describes the lower of the two estimates:

We wonder whether a journalist could read and understand this report and still find the $7.5 billion figure remotely plausible. No red flag? Seriously? We think PolitiFact Missouri did not give the report a serious reading, if it was read at all.


Source 3: Institute for Study of Labor

The report from the Institute for the Study of Labor, by American economists Francine D. Blau and Lawrence M. Kahn, does estimate an unexplained gender wage gap as high as 18 percent for 2014. 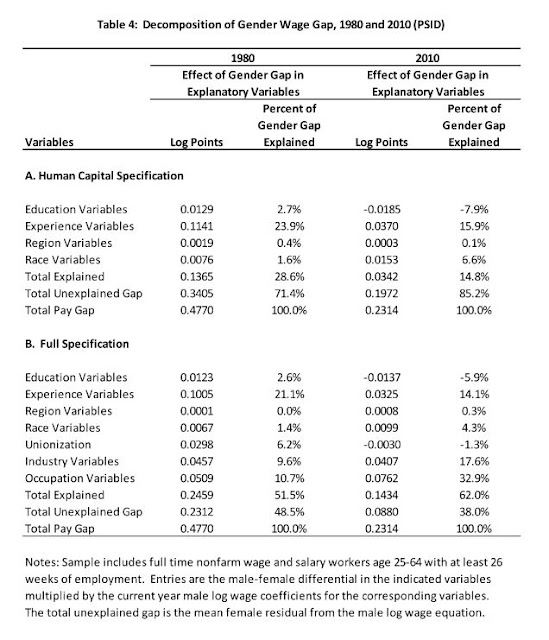 
PolitiFact Missouri fails to note that the "unexplained" category Blau and Kahn use does not include explanations found in its other cited sources, such as the total compensation adjustment mentioned in the paper from the Federal Reserve Bank of St. Louis.

PolitiFact Missouri placed nearly exclusive focus on the high-end estimate [Note: not really an estimate as such: See embedded Update above] from the source most beneficial to the Democratic gubernatorial candidate.

As we researched the source statements PolitiFact Missouri checked from Chris Koster, we found he has a history of passing the raw wage gap off as a gender discrimination gap.

Low-hanging fruit left on the vine

The #WageGap isn’t about a few cents — it can mean EVERYTHING to a working woman trying to provide for her family. pic.twitter.com/ETxlxX3RHE
— Chris Koster (@Koster4Missouri) April 22, 2016

Between April 22, 2016 and May 18, 2016, PolitiFact Missouri passed over the following potential fact checks:

That is an incredible claim on its face.

The #WageGap isn’t about a few cents — it can mean EVERYTHING to a working woman trying to provide for her family. pic.twitter.com/o7OJjbwL30
— Chris Koster (@Koster4Missouri) May 3, 2016


This tweet, from May 3, 2016, has the same text as the tweet PolitiFact Missouri checked. The earlier tweet was accompanied by a graphic making a numbers claim about the wage gap. This tweet features a graphic proclaiming women deserve equal pay for equal work.

It is a plainly deceptive series, in context.

PolitiFact Missouri hid this pattern of deceptive campaigning and found something it could rate "Mostly True" with a bit of cherry-picking. PolitiFact Missouri broke out the surgical tweezers instead of taking the tongs to Koster's misleading tweets.

Is that the kind of impartiality we should expect from neutral fact checkers?

We don't think so.

We don't know that PolitiFact Missouri deliberately chose a softball fact check to which it deliberately added spin. Reasonable doubt persists on that point.

But this case looks bad by itself and even worse as part of PolitiFact's partisan pattern.


Correction May 27, 2016: Executed strikethrough edit, replacing 2014 with the correct year, 2010.
May 31 Update note: We note that PolitiFact Missouri has changed its "$7.5 billion" figure to "1.7 billion" without changing the "Mostly True" rating it gave Koster. Nor did PolitiFact Missouri include any notice to its readers about the correction, contrary to PolitiFact's stated policy. We'll certainly have more to say about that in an upcoming post.