Are the fact checkers at PolitiFact inept? Intentionally deceitful? Both?

Jeff and I chat about that issue from time to time. We try to give people the benefit of the doubt, but PolitiFact makes this one a tough call.

The latest challenge to our attempt to see the best in the people at PolitiFact? They're misleading their readers with their recycled garbage about Social Security's financing structure. On Facebook, PolitiFact reminded readers they should remember and believe PolitiFact's flawed fact checks from the past: 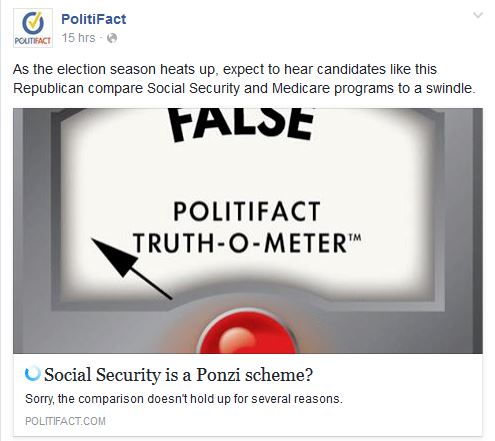 What are the "several reasons" PolitiFact uses to deny the similarity?


"First, in the case of Social Security, no one is being misled," Zuckoff wrote in a January 2009 article in Fortune. "Social Security is exactly what it claims to be: A mandatory transfer payment system under which current workers are taxed on their incomes to pay benefits, with no promises of huge returns."

People are being misled into believing that Social Security's financing is solid, so we challenge Zuckoff's claim that no one is being misled. But, more to the point, Ponzi himself would have had no need to mislead his victims if he shared the government's power to force participation. As Zuckoff notes, Social Security is a mandatory transfer payment system. This can't count as a critical distinguishing difference, for Ponzi would have leaped at the chance to force participation in his scheme.


Second, he wrote, "A Ponzi scheme is unsustainable because the number of potential investors is eventually exhausted." While Social Security faces a huge burden due to retiring Baby Boomers, it can be and has been tweaked, and "the government could change benefit formulas or take other steps, like increasing taxes, to keep the system from failing.


Third, Zuckoff wrote, "Social Security is morally the polar opposite of a Ponzi scheme. ... At the height of the Great Depression, our society (see 'Social') resolved to create a safety net (see 'Security') in the form of a social insurance policy that would pay modest benefits to retirees, the disabled and the survivors of deceased workers. By design, that means a certain amount of wealth transfer, with richer workers subsidizing poorer ones. That might rankle, but it's not fraud."

The third difference, Zuckoff says, is that Social Security is good while Ponzi schemes are bad. We see two foundations for Zuckoff's claim. The first is ideological. Zuckoff takes it as axiomatic that the morality behind Social Security is superior to the morality behind Ponzi schemes. We think it's hard to base an objective finding of fact on the presumption of moral superiority. The second foundation of Zuckoff's argument comes again from his first point: Social Security, unlike a Ponzi scheme, is not fraud. As we pointed out above, Charles Ponzi would have loved to make mandatory participation a feature of his scheme.

That's it. Those three (a bit short of two after winnowing) reasons supposedly make it "False" that Social Security is a Ponzi scheme.

PolitiFact includes comments from CATO Institute's Michael Tanner. Tanner affirms a similarity between Social Security and a Ponzi scheme, while noting some differences. PolitiFact makes those comments a footnote, so the similarities are de-emphasized in the story and ignored in the final ruling.

Ultimately, the thing that keeps Social Security from being a Ponzi scheme in PolitiFact's eyes is a feature that Ponzi would have loved to include: the power to keep new money coming in through mandatory participation. If Ponzi had that power and were alive today, he could still be making money off of new investors.

PolitiFact shows its bias by ignoring the similarities Tanner points out and by making the power to force participation the line of demarcation between Social Security and Ponzi schemes.

There's also the issue of ignored evidence. Professional peer-reviewed journals routinely refer to Social Security's "pay-as-you-go" financing as a Ponzi game or Ponzi scheme. We offer one example among many:


In an unguarded moment 30 years ago, Nobel Laureate Paul Samuelson captured the reasoning undergirding this approach to public finance:


The beauty about social insurance is that it is actuarially un-sound. Everyone who reaches retirement age is given benefit privileges that far exceed anything he has paid in.... Social Security is squarely based on what has been called the eighth wonder of the world--compound interest. A growing nation is the greatest Ponzi game ever contrived. And that is a fact, not a paradox.

With below-replacement fertility and increasing longevity, however, the arithmetic of pay-as-you-go retirement programs changes unforgivingly. As the ratio of employees to retirees falls, a universal pay-as-you-go retirement system has only three options for preventing bankruptcy: reduce pension benefits; raise taxes; restrict eligibility. There are no alternatives.

Should you trust the fact checker that overlooks and denies by omission this part of the story? How does a competent fact checker fail to find Social Security's pay-as-you-go financing described abundantly in professional literature as a Ponzi game?

We don't know the answer to that question. Maybe PolitiFact knows.

The similarities CATO's Michael Tanner pointed out between Social Security and a Ponzi scheme amounted to a "False" rating. But PolitiFact found it "Half True" that President Barack Obama's signature health care reform, the so-called Affordable Care Act, was the Republican health care proposal from 1993.

The Republican bill must have been much more similar to Obamacare than Social Security is to a Ponzi scheme, right? Judge for yourself.

Our take? PolitiFact is magnificently inconsistent. And the inconsistency tends to favor the political left, as in this case.