That created a problem for PolitiFact. PolitiFact had rated "Half True" Clinton's claim that she neither sent or received email marked as classified--at least not marked that way when it was sent. And PolitiFact just issued that rating on July 3, 2016 (Update July 7, 2016: PolitiFact has deleted the original story from its site, so find the archived version here). 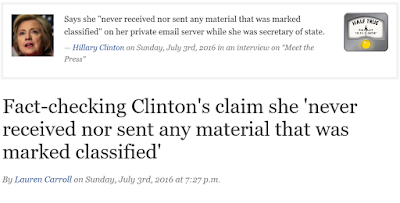 A scant two days later Lauren Carroll, yes the same Lauren Carroll from screen-captured byline, published an explanation of sorts, along the same lines as the editor's note that now accompanies the original story:


(After this fact-check published, FBI Director James Comey released details of the FBI's investigation into Hillary Clinton's use of a private email server. This claim will remain rated Half True, because we base our rulings on when a statement was made and on the information available at that time. But the FBI investigation clearly undercuts Clinton’s defense if she makes a similar claim again. You can read more about the findings of the FBI investigation here.)

Since we're talking about PolitiFact, "clearly undercuts" means if PolitiFact knew three days earlier what we all know now, Clinton would have received a mere "Mostly False" rating.

Let's expose the BS for what it is.

Note that PolitiFact declares that Clinton's false claim from July 3 will keep its "Half True" rating. PolitiFact invokes one of its Play-Doh principles to justify the decision:


Timing – Our rulings are based on when a statement was made and on the information available at that time.

We imagine the justification may appear legitimate to some. It is not legitimate.

It's reasonable to base a ruling on information available at the time when somebody makes a claim like Ann Hathaway affirming "the majority of Americans now support gay marriage." Obviously a fact checker can't judge the truth of that statement based on a poll published after the claim was made. Or on a poll where the findings were within the margin of error. Well, PolitiFact did both, but our readers get the point: How could Ann Hathaway justify her claim ahead of the poll, assuming its results were outside the margin of error? If it takes two years after her statement for the majority to occur, should we expect fact-checkers to make corrections at that late date? No. That would be silly. And it's almost as silly three days later.

The case with Clinton is far different.

Hathaway could not have a justified belief that a majority favored gay marriage back on March 15, 2011. PolitiFact could have justified calling Hathaway's claim false (it received a "Mostly True" rating).

Clinton, in contrast, had the very best position available to know whether she sent or received emails marked as classified. She had every reason to know the truth back in 2009-2013 as she served as secretary of state.

Clinton's is not the sort of case where PolitiFact's timing issue makes sense. The fact was established weeks ago that Clinton received classified emails. Apparently the only reason PolitiFact gave Clinton credit for a half-truth is because Clinton lied. The excuse occurs in Lauren Carroll's PolitiSplaining:


"I never received nor sent any material that was marked classified," Clinton said July 2, after Clinton was interviewed by the FBI as part of its investigation. "And there is a process for the review of material before it is released to the public, and there were decisions made that material should be classified. I do call that retroactively classifying."

Clinton’s statements like this left open the question of whether she sent or received classified information that was inappropriately left unlabeled — or that Clinton, as head of the department, failed to recognize and deal with information that should have been classified. Because of that obfuscation, we rated her claim Half True.

See, the evidence said Clinton's claim was false, but Clinton insisted it was true, obfuscating the facts. So PolitiFact had to give Clinton a "Half True" because of the obfuscation.

The "Timing" principle makes up only half  of PolitiFact's pretzel of Play-Doh principles. PolitiFact has another (ill-advised, in our opinion) principle relevant to this case:


Burden of proof – People who make factual claims are accountable for their words and should be able to provide evidence to back them up. We will try to verify their statements, but we believe the burden of proof is on the person making the statement.

How does that principle work in practice? Ask Senator Harry Reid (D-Nev.). Reid, while serving as Senate Majority Leader, accused 2012 Republican presidential candidate Mitt Romney of not paying any taxes. PolitiFact found no evidence to support Reid's claim and so rated it "Pants on Fire." PolitiFact did not have access to Romney's tax returns showing that Reid was wrong. Rather, PolitiFact used the opinions of tax experts to decide the question.

Don't ask us why Reid's insistence he was right failed to net him a "Half True." Sometimes PolitiFact is so unfair.

The burden of proof principle should have applied in Clinton's case. Was there evidence supporting Clinton's claim? The only way to know was to have access to Clinton's emails. But Clinton made sure that happened only in part. PolitiFact ended up having to take Clinton at her word to give her that "Half True" rating.

In conclusion, don't buy PolitiFact's BS that it's basing the enduring "Half True" for Clinton on some type of real principle. Even if the wording of the principles doesn't change, the principles change in meaning to fit the need of the moment.

It's the type of thing that gives fact-checking, and PolitiFact, a bad name.

Updated this item July 6, 2016 with some grammar and formatting tweaks.